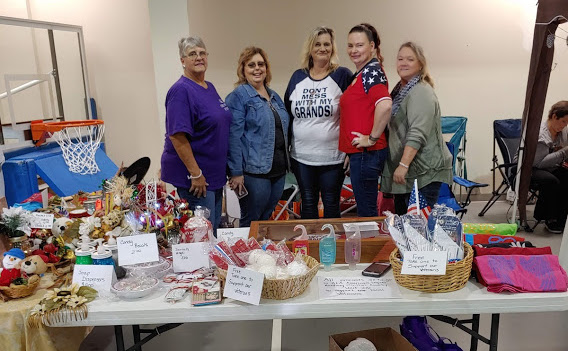 The American Legion Auxiliary celebrated its 100th anniversary in November.

Originally founded on Nov. 10, 1919 for the female family members of servicemen, the group has recently changed to include spouses of service members.

If the service member is still alive, they must be a member of the Legion for their family members to be a part of the Auxiliary.

It takes 10 members to charter a unit.

“There is a need to help the veterans in this community,” President Deborah Akers said. “There are a lot of veterans that don’t know about the American Legion in Chilton County.”

She said all Auxiliary Units support Americanism, national security, Veterans Administration and Rehabilitation as well as children and youth.

“After World War I, we had a lot of veterans with severe battle wounds … the Auxiliary kind of came along as a way to serve the veterans,” Greg Akers, American Legion state adjutant, said.

Deborah Akers said the American Legion Auxiliary “is like a family.”

Projects for the unit have included being a part of local festivals to raise awareness for the group, handing out veteran suicide prevention packets at Trick or Treat the Streets, took items to veterans in hospice and fundraisers for future programs.

The Unit also placed more than 700 flags on veterans’ graves for Memorial Day.

Debora Ratliff, first vice president, said she has been an Auxiliary member in various places she has lived and joined 216 when it formed.

“After I joined the unit, I realized there are a lot of veterans here who could use some help,” Ratliff said. “We try to serve those who can’t serve themselves.”

This can include running errands or cooking for veterans.

Tracy Weiss, treasurer, said she was asked to join by Deborah Akers because her husband is a veteran.

“Once I joined, I saw the need and the importance of it and also of the American Legion,” Weiss said.

Betty McCary said her husband had joined the Legion “and I followed suit.”

As a part of the youth focus, the unit sent six girls to Girls State, a leadership conference focused on government and citizenship. Greg Akers said there are several scholarship opportunities connected to this.

American Legion Auxiliary membership is open to those of any age that meet the other qualifications. Those under 18 would be junior members.

The post and Unit meet once a month on the first Saturday of the month at 11 a.m.