UPDATE: One escapee in custody in Florida 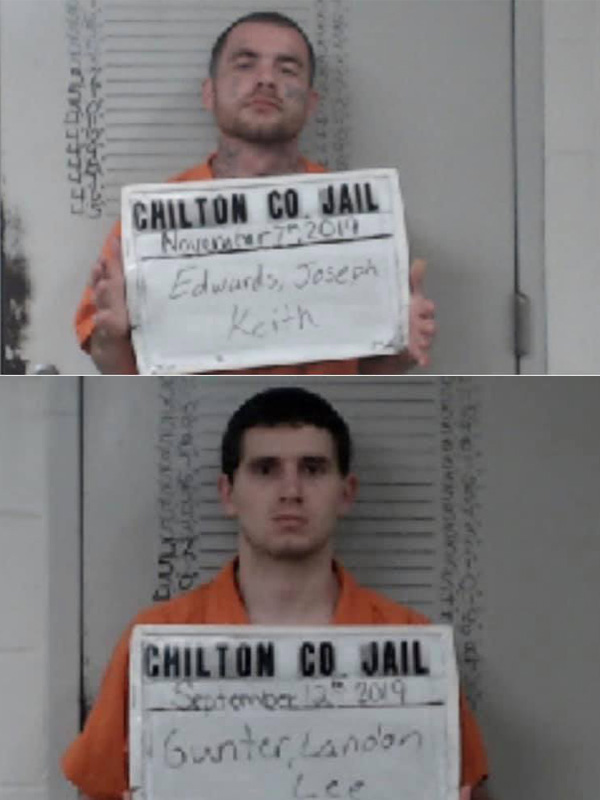 Joseph Keith Edwards and Landon Lee Gunter escaped from the Chilton County Jail late Sunday night and are on the run. (CCSO)

Per Shearon, Edwards was involved in a wreck while being pursued by authorities after another theft.

He was airlifted to a local hospital for observation but was said to be alert.

Two inmates who escaped from the Chilton County Jail over the weekend were last seen near Saraland on I-65 near Mobile.

According to Sheriff John Shearon, the two men, Joseph Keith Edwards and Landon Lee Gunter, somehow managed to break a steel seat off the wall of their cell and broke the wall around a window in order to get outside.

From there, the two scaled the fence in order to flee the jail.

“It is unclear how long the two inmates were gone before their absence was noticed,” said the Chilton County Sheriff’s Office in a post on social media. “Both inmates were present at 7:05 p.m. for head count. Edwards, white male, and 5’7.” Edwards has facial and body tattoos. Current charges are Possession of Dangerous Drugs, Possession of Drug Paraphernalia 1st Degree, and Receiving Stolen Vehicle with a bond of $13,250.

According to Shearon, the suspects stole a truck from Martin Funeral Home and drove it south on I-65.

They were spotted near Saraland, where they carjacked another vehicle.

“We believe they may be trying to get to Pensacola or (somewhere in) Mississippi,” Shearon said.

“The Sheriff’s Office is exhausting all resources and efforts to bring these two inmates back into custody,” said the CCSO in the post. “However, we need the community’s help. If you see something, say something. Please call 911 if you see these male subjects.”

Shearon said he would like to thank all of the members of law enforcement who have helped out with this case. He said the U.S. Marshals have been contacted and warrants have been signed.