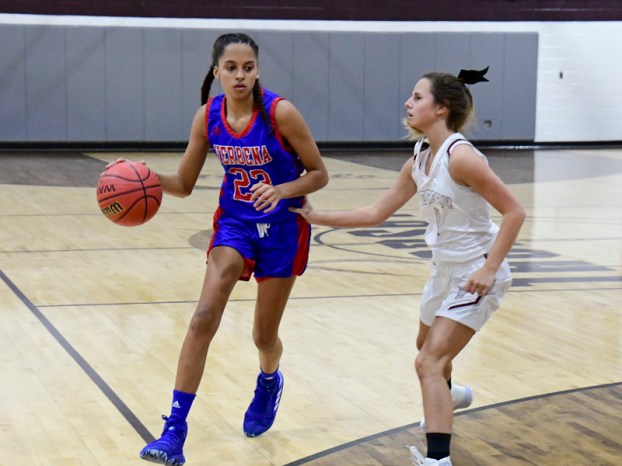 Jasmyn White of Verbena led all scorers with 37 points in the game. (Photo by Anthony Richards)

The Verbena girls basketball team avoided a comeback attempt by Thorsby (1-1) and held on to win 49-48 and improve to 3-1 on the early season.

The Red Devils’ victory was by the narrowest of margins and came after Thorsby stormed back after trailing by 12 points in the third quarter following an old-fashioned 3-point play by Isabella McDaniel. She had seven points on the night.

However, the Rebels continued to cut the deficit to single digits and trailed by eight heading into the fourth quarter.

Thorsby continued to chip away at Verbena’s lead and eventually jumped out in front thanks to a stolen inbound pass and layup by Madisyn Ellison.

“We quit boxing out all together,” Sneed said. “They [Thorsby] put pressure on the inbound, and we just kept giving the ball to them. Turnovers were killing us at the end.”

“I’m glad we were able to hold on,” Sneed said. “Free throw shooting was obviously key down the stretch.” 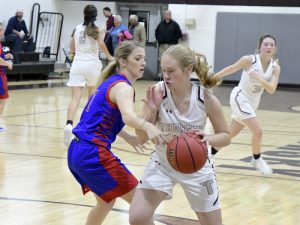 Both guards went head-to-head in trading highlight reel plays, but it was White that made the last statement, as she grabbed a rebound and drove the length of the court for a layup plus a foul to put Verbena back in front 46-45 with 1:28 to play.

At that point in the game the foul White drew was just as big as the points she converted, because it was Wyatt’s fifth of the contest and resulted in her fouling out prior to the waning seconds.

According to Sneed, he thought his team did a nice job of holding Wyatt in check despite the 20-plus point performance.

“We stayed in between her and the basket and did not allow her to slash that much unless it was on a steal or something poor that we did,” Sneed said. “She got her points, but she is a fantastic player.”

Thorsby had several trips down the court in the final 1:28 but were only able to score once on a 3-pointer by Lindsey Wood, which cut Verbena’s lead to one with 19.3 seconds remaining.

Wood had another look at the basket from beyond the arc with 1.2 seconds on the clock, but that attempt came up short as the buzzer sounded.

“I think tomorrow when we go back and look at the tape and compare the first half versus the second half, they are going to see that we got complacent and took a few plays off,” Sneed said. “It comes back and gets you quick, because when something doesn’t go your way, you tend to compound that with mistakes.”

Thorsby’s boys basketball team improved to 2-0 on the young season following a convincing 51-33 win against Verbena on Nov.... read more