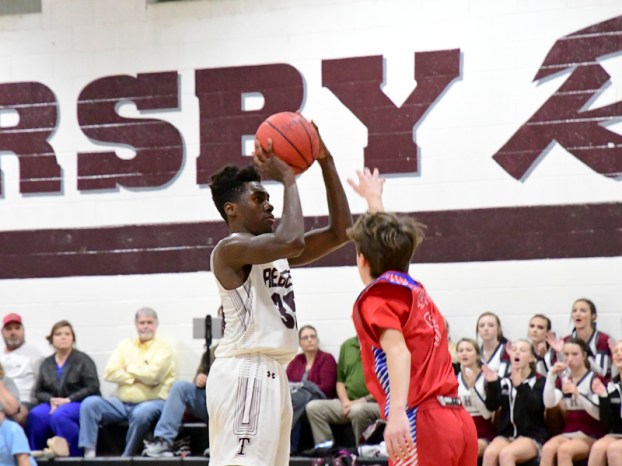 Xzavier Leverette of Thorsby pulls up for a jump shot. He had a 20-point night. (Photo by Anthony Richards)

Thorsby’s boys basketball team improved to 2-0 on the young season following a convincing 51-33 win against Verbena on Nov. 19.

Xzavier Leverette led the Rebels with 20 points, including a 3-pointer for good measure in the fourth quarter.

“I felt it tonight,” Leverette said. “It was like a spark, and now I just want to keep it going and get after it.”

Thorsby was on target from long range all night, as Koby Davis, Tyler Ray, Luke Davis and Jonathan Castro-Gonzales each joined Leverette by burying a 3-pointer.

Jamarias Hayes provided the Rebels with valuable minutes off the bench with eight points, all of which came as a result of his play in the post.

Verbena scored just four first half points in comparison to Thorsby’s 19 and needed a basket at the buzzer to avoid being shutout in the second quarter. 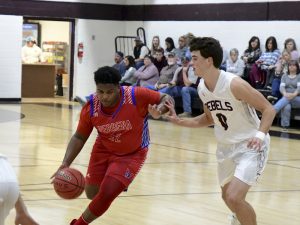 However, the Red Devils found a groove offensively in the second half, and it was fueled by the hot shooting of senior Xavier Dejarnett who finished with a game-high 24 points.

“I thought we played better early than we did late,” Thorsby head coach Russell Ricks said. “I want perfection, and we may not ever get there, but that’s what you’ve got to strive for. I’m happy for the win, because it beats the alternative.”

All of Dejarnett’s points came in the second half, including six makes from bonus land.

“Defense is an attitude and I didn’t think we played as hard as we needed to play,” Ricks said. “They weren’t playing with the effort I want them to on defense, but we’ve only been practicing for a week so they’ll learn.”

By J.R. TIDWELL / Editor All that was standing in the way of the Isabella Mustangs completing a 10-0 regular... read more