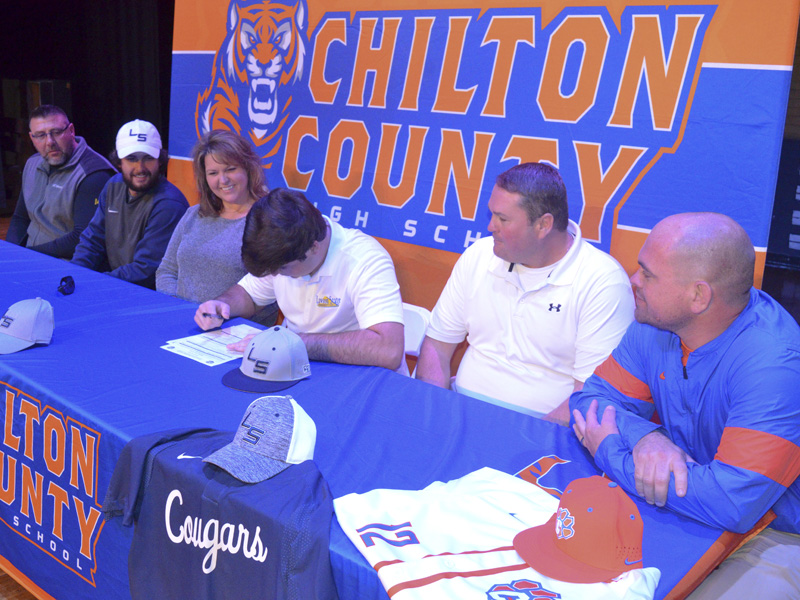 Cameron Baker of CCHS was surrounded by family and coaches when he signed to play baseball at Lawson State Community College on Nov. 19. (Photo by Anthony Richards)

Cameron Baker of CCHS signed to play baseball at Lawson State Community College during a ceremony on Nov. 19.

The recruiting process differs for each athlete, but it can be very involved and create a stressful decision.

“I was kind of nervous when I woke up this morning, and I’m kind of glad it’s over with,” Baker said. “It’s a relief off my back.”

Signing prior to the high school baseball season was important for Baker, because now it allows him to focus fully on the remainder of his senior year.

“I’ll feel like I’m better off not having to worry about where I’m going [to college],” Baker said.

According to Baker, the strong relationships he developed with the Lawson State coaching staff played a large role in his final choice.

“It just felt like home to me,” Baker said.

Baker has been playing competitive baseball since he was 4 years old and has found a home over the years at first base. 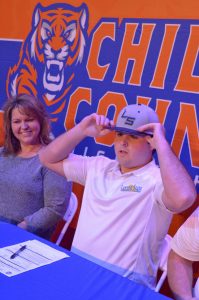 Baker puts on a Lawson State hat after making it official. (Photo by Anthony Richards)

He has become known as a powerful bat within the CCHS lineup.

“I try to hit it far, because I can’t run as fast as the others,” Baker chuckled.

His prowess at the plate was something that quickly caught the eyes of LSCC assistant coach Thomas Lowery, who had the opportunity to coach Baker during the summer.

“Right off the bat, the hitting was just above and beyond,” Lowery said. “He had what seemed to be a very advanced IQ at the plate.”

Another thing that convinced Lowery that Baker was a fit with the program was his quiet nature and humbled attitude.

“What really turned me on to him was just the way he goes about his business,” Lowery said. “He’s not looking for a tone of praise, he’s just looking to work hard on becoming the best baseball player that he can be.”

Baker has played other sports throughout the years, but baseball was always his first love.

“I always enjoyed watching the game on TV growing up, and I just want to keep being a part of it,” Baker said.

The thing Baker is looking forward to most about playing at the college level is having the opportunity to travel and visit new places.