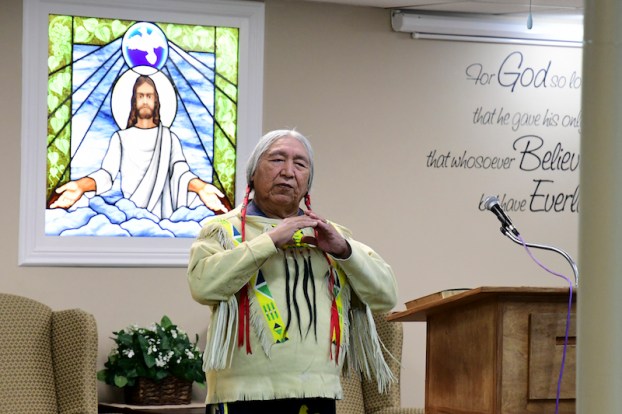 Wilson Spottedbird, a member of the Kiowa tribe, recounted how his people learned of God from missionaries at Through the Grace of God in Clanton Nov. 17. (J.R. TIDWELL/ADVERTISER)

November is Native American Heritage Month. In honor of this, Through the Grace of God Ministries Pastor Ralph Bingham invited his friend Wilson Spottedbird to speak during church service on Nov. 17.

Spottedbird recounted the tale of how his people, the Kiowa tribe, were taught about Christianity in the late 1800s.

“Two little missionary women from Canada came to my people in Oklahoma before it was a state,” he said. “It wasn’t called Oklahoma, it was called Indian Territory. They met the chief, and he went to their village to sit down with them and ask them ‘Are you lost?’ They said ‘No, I am found. Let me tell you who led me here.’”

The missionaries, including Isabel Crawford, used sign language and interpreters to share about God and his son Jesus with the tribe.

At the time, Spottedbird said the Kiowa and their allies the Comanche were going on killing raids in Texas and “terrorizing” settlers who moved out west.

“After the chief met with these women, he got saved,” Spottedbird said.

The Kiowa chief went to the Comanche chief and told them their tribe would no longer fight.

“God told me not to kill. I am going to obey Him,” Spottedbird said of the Kiowa chief. “That’s how my people got saved, because of two brave little women. We called them the ‘Little Jesus Women.’”

The Elk Creek Kiowa Baptist Church was founded, and Spottedbird said it still exists to this day.

Spottedbird also sang the congregation some traditional Kiowa prayer songs, including one that states “I am glad I came to know you as God.”

“They used to say ‘Creator,’” Spottedbird said. “They didn’t know God” before the missionaries came.

Spottedbird said he learned the Kiowa prayer songs by sitting and hearing his father and other older tribe members sing them for hours.

“I never dreamed God would give me something wonderful like these songs,” he said.

Spottedbird moved to Alabama some 20 years ago.

Through the Grace of God Ministries is located at 75 Eighth St. S in Clanton.

By JOYANNA LOVE/ Senior Staff Writer Christmas was in the air at the Maymay Made It open house in Verbena... read more