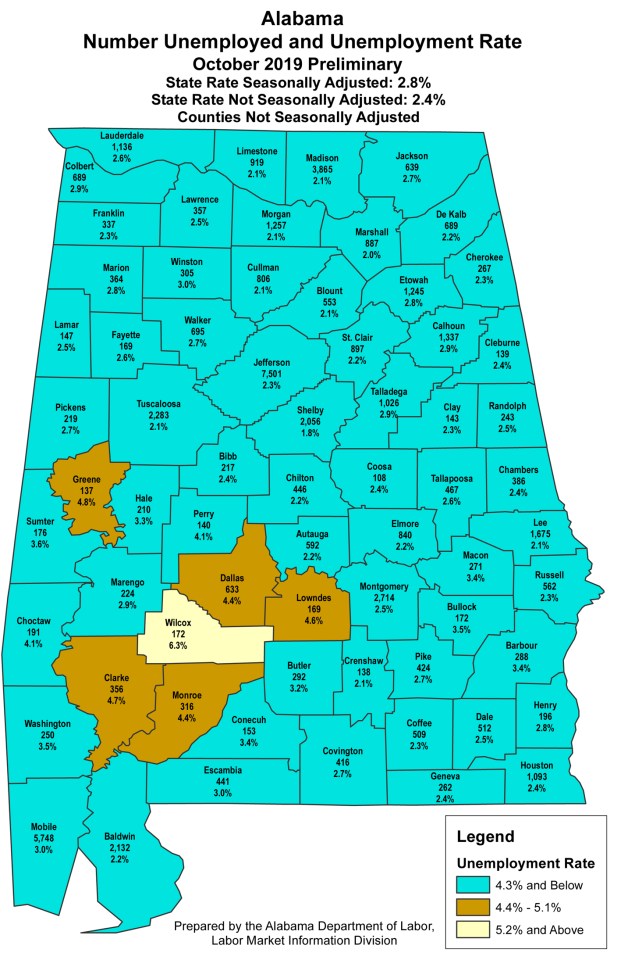 This graphic shows the unemployment rate and number of unemployed residents for each county in Alabama. (ALABAMA DEPARTMENT OF LABOR)

The unemployment rate across the state of Alabama continued to fall to record lows during the month of October.

According to the Alabama Department of Labor, the state’s unemployment rate for October was 2.8%, a record low and down from 3.0% in September.

Chilton County experienced another drop in the rate as well. The local unemployment rate for October was 2.2%, down from 2.3% the month prior.

According to state labor department statistics, only 446 people in Chilton County were listed as unemployed during October, down from 457 in September.

The unemployment rate for Chilton County in October of last year was 3.4%, a decrease of 1.2%.

The state has been setting a new record low each month for most of 2019.

“Alabama has never experienced an unemployment rate in the two percent range,” said Alabama Department of Labor Secretary Fitzgerald Washington. “While we have been breaking unemployment records all year, I have to say that this is one metric we really weren’t sure we’d ever surpass, but we have!”
Gov. Kay Ivey echoed Washington’s sentiment.

“More than 80,000 Alabamians are working today than last year, and 20,000 fewer people are counted as unemployed,” she said. “Our economy is supporting over 2.1 million jobs, more than ever before. Those are tremendous numbers, and we are extremely proud of them.

“We continue to show the rest of the country that Alabama is indeed open for business! Employers have confidence in our economy and jobseekers who are joining the workforce are finding employment. Just yesterday, we celebrated Hyundai Motor Manufacturing of Alabama’s expansion which will add 200 new employees. This adds to the steady announcements we are making every month, and we will continue working hard to bring those jobs home, so that every Alabamian who wants a job, will have one!”

The number of people in the civilian labor force increased to 2,264,014, also a new record high, representing an over-the-year increase of 60,068.

The civilian labor force in Chilton County was 20,112 for October, with 19,666 people listed as employed.

Northern neighbor Shelby County once again posted the lowest unemployment rate at 1.8%, while Wilcox County remained the highest rate at 6.3%.

Selma posted one of the highest unemployment rates for a city at 5.2%.

A resolution was passed to send out for bids for the placement of asphalt for various county roads pertaining to... read more