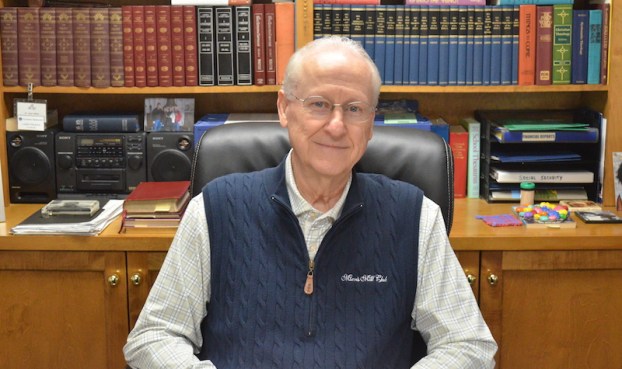 Dr. Larry Felkins is retiring from the Chilton Baptist Association after 22 years as director.

Felkins’s last day on the job will be Dec. 31. A reception will be hosted on Dec. 1 in honor of his retirement at Clanton First Baptist Church at 2 p.m.

“It has been some of the most challenging and rewarding years of my life here,” Felkins said.

He clarified that he meant challenging in a good way.

Felkins said he has met many people in the position, and “it has been an honor to know these folks and to serve them.”

Retirement has been on his mind for the past two years. Felkins said he wanted the timing to be right.

“My wife (Judy) was the hardest one to convince,” Felkins said. “She is as much involved as I am. She does senior adult ministry and women’s ministry … She plays a key role in all of this.”

Upon retiring, the Felkins will be moving to Auburn to be closer to their youngest daughter and their younger grandchildren.

Felkins described the association director as a “pastor to the pastors.”

“People don’t think about it, but a pastor doesn’t really have a pastor,” Felkins said. “Everybody needs a pastor at some time or another, and I fill that role.”

He said he also coordinates joint ministry opportunities for the 56 churches that are a part of the association, including training for volunteers, supporting new churches, disaster relief and children’s programs Royal Ambassadors and Girls in Action.

There are three churches in the first few years of existence outside of Chilton County that the association supports, Felkins said.

“Disaster relief is a big part of what we do,” Felkins said.

He mentioned that the disaster relief efforts will soon include a mobile laundry facility.

However, the annual children’s camp holds a special place in his heart.

“The thing that I enjoy the most, the very most, is our annual kid’s camp because it is different from anything else I do,” Felkins said.

Felkins said he and Judy served as “camp grandparents,” keeping an eye on children and being an older adult present to relieve some parents concerns.

He has also been known to slide down the camp’s iconic slide into the lake.

Felkins has been to Guatemala 11 times on missions trips with the association.

Each church in the association has two members on the association’s leadership team, which hires a director. Usually, the group asks for recommendations from the state convention.

Felkins said he had served on an association leadership team in Bessemer that talked to the state convention about potentially candidates for the Bessemer Association.

The state convention employee later asked if Felkins would ever consider applying to become an association director.

“There were a couple of positions in the state open not long after that,” Felkins said. “He recommended me.”

Prior to this, he had been a pastor.

Felkins said his father was a pastor and also went on to be an association director. His grandfather (mother’s father) was the director of the Chilton Baptist Association in the ’50s and ’60s.

Judy and Larry were married in January 1967, months before Felkins joined the United States Air Force. Later, he joined the Army National Guard. After some rebellious years, Felkins returned to church after his wife and children had started attending. He became involved in ministries at the church and was later ordained as a deacon.

In May 1984, he was ordained as a pastor and began pastoring his first church.

He left the Army National Guard after he became a pastor so as not to risk his church having their pastor deployed.

Cancer event surpasses funds from a year ago