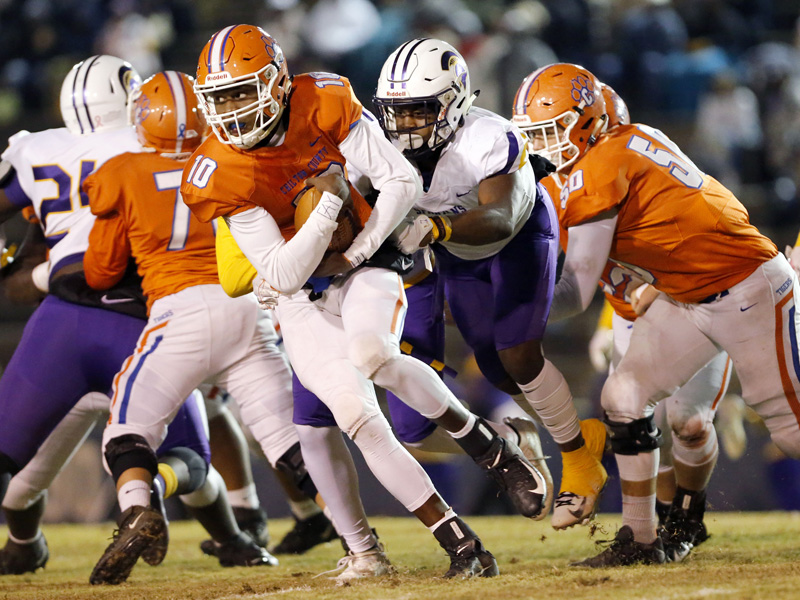 Shi-Keem Laister and the CCHS football team are asking for the community’s support to attend the Second Annual CCHS Gridiron Club Steak Dinner and Drawdown on Nov. 23. (Photo by Brandon Sumrall/Special)

Chilton County High School is fresh off its second-straight playoff appearance and is looking to build upon the momentum with the Second Annual CCHS Gridiron Club Steak Dinner and Drawdown on Nov. 23.

“Without the proper community support and these fundraisers, we can’t build up the program to the best of its potential and one that the school and the community can be proud of,” CCHS head coach Tal Morrison said.

The event will be held at 6 p.m. in the CCHS cafeteria and two steak dinners will be included with every $100 donation.

“We’re trying to get our kids the best opportunity possible to be successful,” Morrison said. “That starts with the support from our community.”

One of the things that the fundraiser will help with is providing an equipment upgrade.

According to Morrison, the set of home orange jerseys that they used throughout the season are five years old and another set of jerseys cannot be used because they do not have all the numbers available.

“Our goal is to be reaching the quarterfinals, semifinals and championship every year,” Morrison said. “We want to be sustainable.”

Morrison believes that improving the equipment is another good step in reaching that goal.

Several door prizes will be handed out during the fundraiser, including three-day and two-night stays at condos in both Gulf Shores and Gatlinburg.

“Everyone in attendance will have some prize they can choose from,” Morrison said.

The Tigers finished 2019 with a record of 6-5 and hosted a playoff game for the first time since 2012 after claiming the runner-up spot in Region 3-5A.

“There’s a lot of great things we did this year,” Morrison said. “Now our job is to keep that going into the next.”

Thorsby falls to Goshen in 1st round