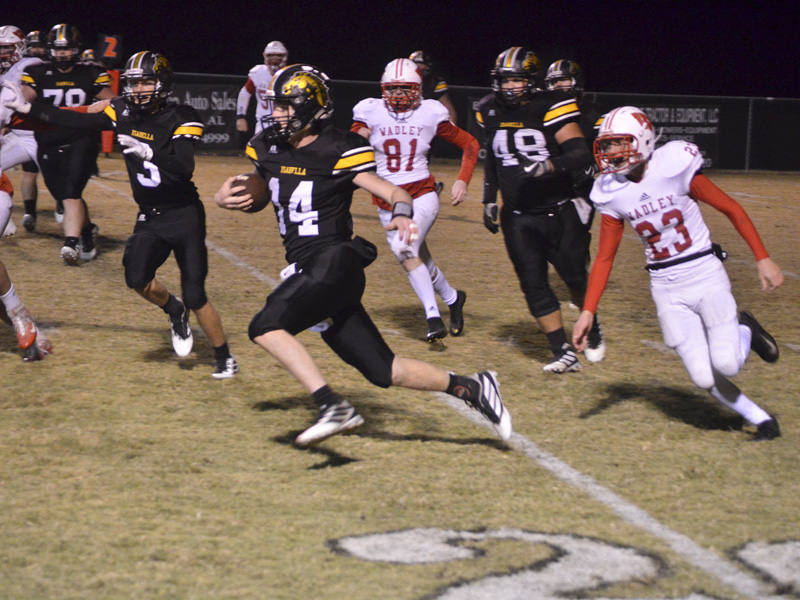 Isabella’s Cole Atchison runs the ball in the first round against Wadley Nov. 8. (Photo by Anthony Richards)

Isabella is moving on in the Class 1A playoffs following a dominant 45-20 first round victory against Wadley (5-5) Nov. 8.

The Mustangs (11-0) scored touchdowns on their first six offensive possessions in the game.

Kendall Reeves hauled in three touchdowns on the night and finished with 131 yards on four catches.

“I couldn’t have done it without my o-line blocking and my quarterback throwing,” Reeves said.

According to Reeves, the continued success of the passing game this season is a testament to the amount of 7-on-7 work that was done during the offseason.

His touchdowns were 57, 13 and 11 yards respectively, with the second of those coming after a beautiful toe tap in the back of the end zone to prove he was in bounds with possession.

Cole Atchison was perfect through the air, as he completed all seven of his passes for 191 yards to go with the three touchdown tosses. 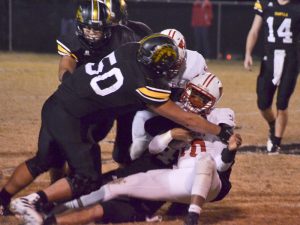 Wadley played a lot of man coverage, which allowed the Isabella receivers to win one-on-one matchups on the outside.

“It’s all about you versus him [defender],” Reeves said. “This receiving group has made great strides all year.”

Lance Price ran for 102 bruising yards and two scores on 17 carries, while Atchison gained the bulk of his 63 rushing yards on a 56-yard touchdown run in the first quarter.

Accompanying the offensive explosion was a smothering defensive effort that held Wadley to 62 total yards and no points heading into the fourth quarter.

The Mustangs forced three turnovers thanks to interceptions by Reeves and Austin Jones and a strip sack fumble recovery by Reid Mitchell. Each of the turnovers came in the first half.

Isabella led 32-0 at halftime and 39-0 at the end of the third, which led to a plethora of young reserve players getting valuable playing time in the fourth quarter.

However, Wadley was able to score 20 points in the final quarter as a result.

Next up for Isabella is a second round matchup with Millry (10-1).