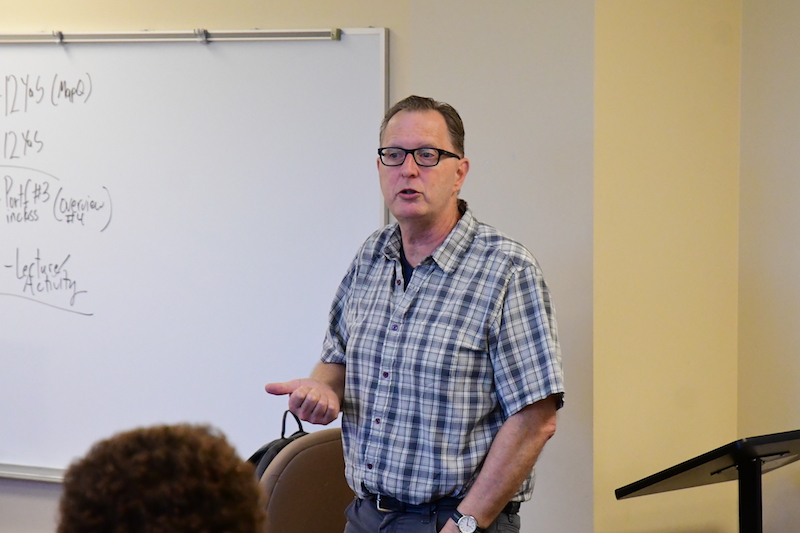 Jefferson State Community College students in the Psychology 201 class at the Chilton-Clanton Campus discussed causes and statistics of human trafficking (forced labor and the sex trade) with Rev. Dr. Kevin Austin of the Set Free Movement, which is dedicated to creating holistic communities and ending modern slavery.

Austin emphasized that modern day slavery is a symptom of the problem of broken relationships and communities that lead to objectifying people as less than human.

“Human trafficking is a symptom of something that is underneath,” Austin said. “So the question is, if these are symptoms, what is the problem? I think it is all about relational brokenness.”

Austin estimated that there were 1 million slaves in the sex trade and forced labor in the United States.

“Seventy percent of people involved in prostitution were at one point in foster children,” Austin said.

He defined slavery as when someone is “unable to walk away, they are doing things they don’t want to do (for no pay) and they are under the threat of violence.”

Human trafficking is a $150 billion a year industry worldwide.

“It is a huge criminal money-making activity,” Austin said. “… It’s not just about sex trafficking. It is also about labor trafficking. If you have ever worn cotton, if you use any technology, if you drive an automobile, if you have eaten Hershey’s chocolate, you have participated in the slavery industry.”

Fishing is another industry that globally has a lot of slave labor, Austin said.

This also means there is not a comprehensive list of companies whose supply chain includes slave labor. However, Austin said there are companies, such as Levi Strauss, who have taken a stand of “no tolerance” against slavery in their product and are working to eliminate it.

Statistics by the Polaris Project state a runaway is approached by a human trafficker within 48 hours in the United States, Austin said, commenting that it is a shorter amount of time in the larger city where he lives.

“There are more labor slaves in the world today than there are sex slaves,” Austin said.

He said globally trafficking of children has increased.

In the United States, Austin said the lifespan of someone in forced prostitution is typically 10 years.

Vulnerability because of poverty, racism, lack of education, gender inequality and other factors creates an increased risk of becoming a slave.

He said coercion, rather than straight kidnapping, is often used to enslave a person and families.

“How do we address some of this adequately?” Austin asked the students. “We can’t just create programs and projects to solve these problems … If the real problem is brokenness in community, then the solution is community — whole, healing vibrant community.”

He said those who are in healthy relationships with others will have people in their lives to help them before they give into coercion or fall into a human trafficking situation.

“If we are not in a relationship and if you are all alone and you don’t have any friends and nobody cares about you, then you are just ready to be picked (by a trafficker),” Austin said.

He said a person’s value system drives their actions, and this needs to be changed in some cases.

He said the changes that have come to Alabama since 1950 have come because of a change in people’s value system.

Members of the group will spend up to four years learning about the community and becoming a part of it and “trying to build community around this issue.”

“Rather than turning out projects and programs, they create community,” Austin said. “Then, they do a deep assessment of their communities.”

This assessment can lead to finding ways to help the community and build community for those who are vulnerable. In Seattle, a group based out of a local church created a team of volunteers to read and play with foster care children in a room at the facility it had renovated while the social worker was on the phone trying to place them. Previously, the child had been sitting next to the social worker while these calls were made.

“How traumatic that was,” Austin said.

The group also provides a meal once a month for foster parents to attend training with free childcare provided by the church. An annual conference is also held for foster girls “and they are told, ‘You matter,’” Austin said.

“They are creating transformational change in the system,” Austin said. “It’s not all bad news. There are people doing incredible things.”

Austin said ending slavery will require work from those in many aspects of society — government, business, the arts, education, etc.

He told of how different groups of people came together in the late 1700- early 1800s to work toward ending slavery in the United Kingdom and were successful in slavery being outlawed.

Austin said today the United Kingdom is still one of the countries with a low rate of slavery.

“The created a cultural change that change the value system over a long period of time,” Austin said.

Even last year, new laws in the UK were passed to combat human trafficking.

More information is available at setfreemovement.com.