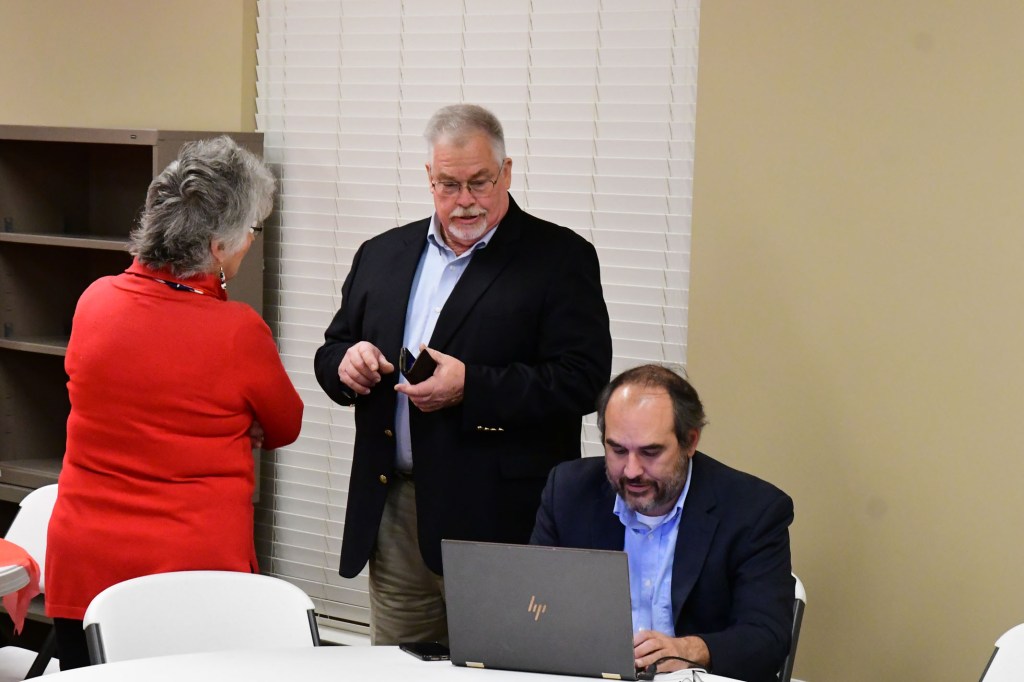 Van Smith takes a look at some election results after polls closed Nov. 5. Alfa hosted a general election victory celebration for Smith at its office on First Avenue in Clanton. (J.R. TIDWELL/ADVERTISER)

Van Smith is the new state representative for Alabama House District 42 after overwhelmingly winning the general election on Nov. 5.

Smith received 2,485 votes (88.2%) of the votes between Chilton and Autauga counties. District 42 covers most of Chilton County and part of Autauga.

These numbers include everything but provisional ballots, which are generally too few in number to affect the outcome of an election.

“I have to go back to the primary,” Smith said. “The turnout was overwhelming. We felt like we had a good strategy. We just got out and saw the people.”

Provisional ballots will be counted on Nov. 12, and Alabama Secretary of State John Merrill’s office will certify the election by Nov. 27.

A general election victory celebration was held for Smith at the Alfa office on First Avenue in Clanton as polls closed and voting reports rolled in.

“Congratulations to Van Smith on his victory in the special election for the Alabama State House, District 42,” said Alabama Republican Party Chairman Terry Lathan. “This may be considered a solid Republican area, but State Representative-elect Smith worked hard to earn the respect and trust of Chilton and Autauga County voters and took nothing for granted. We look forward to him joining our Republican supermajority in Montgomery for the next legislative session.”

District 49 Rep. April Weaver and District 81 Rep. Ed Oliver were also on hand to congratulate Smith. Weaver and Oliver’s districts cover the areas of Chilton County outside of District 42.

Now that Smith has won the seat, he hopes his experience will help the residents of his district.

“I have spent 37 years in education,” he said. “All along I farmed, so I have an agrarian background. I enjoy working the land and individuals that are associated with timber and cropland. Industrial development is also very important to me, and I think we have places in Chilton and Autauga county that can benefit from my experience. I’m going to center everything I do around serving others for the benefit of the whole.”

Smith said District 42 has “wonderful” resources in both children and the workforce.

“In our geographical area we have everything you could want in a district,” he said. “I hope that we can make positive use of that and try to be visionary with a common sense approach to things. I look forward to the opportunity to serve the people. I have an open door and an open ear. I hope we can work together throughout these two years.”

A special election was mandated by Gov. Kay Ivey after former District 42 Rep. Jimmy Martin passed away earlier this year.

Smith will serve in the position until 2022 when the chair will again be up for election.

“He was a family friend,” Smith said. “The Martin family has always been friends with my family. We always appreciated that friendship. I admired him. I won’t be able to replace him. I am honored to take the seat where he was. I was hoping to be here in 2022, because I wanted him to beat the cancer that he had. But God has a plan. We see His hand as it works, but sometimes we see that in the rear-view mirror.”