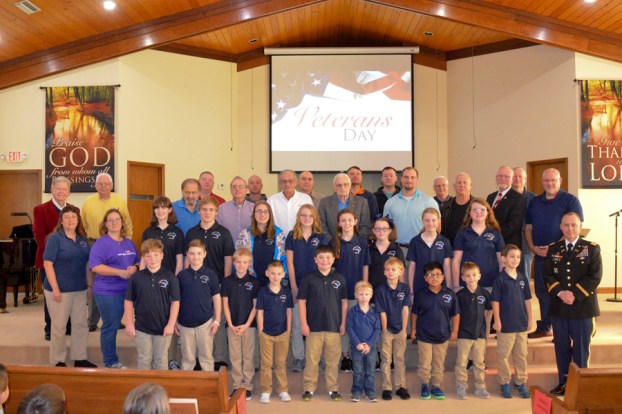 CCA students stand on stage with the veterans they invited to the school’s annual Veterans Day ceremony on Nov. 6. (Photo by Anthony Richards)

Veterans Day came early for students at Chilton Christian Academy, which held its annual commemoration and ceremony on Nov. 6.

“I’m proud to be a veteran and to be part of an organization that has helped change the world,” Hayes said. “We’ve been so effective that some people even doubt our value [as a military].”

Hayes has spent 20-plus years in the military since enlisting in 1997, including provided cannon fire for the 2nd Brigade Combat Team and 3rd Infantry Division’s “thunder run” into Baghdad in April 2003 as part of Operation Iraqi Freedom. 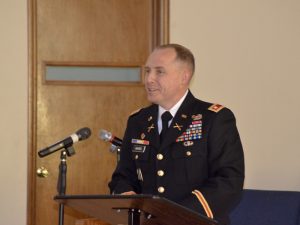 U.S. Army Lt. Col. Emory J. Hayes was the guest speaker at the CCA Veterans Day ceremony on Nov. 6. He has spent 20-plus years in the military. (Photo by Anthony Richards)

He returned to Baghdad in January 2005 and served as a platoon leader during a yearlong counter insurgency deployment. During that time, his platoon executed more than 600 patrols and detained about 20 insurgents.

Since 2017, Hayes has been assistant professor of military sciences at the University of Alabama at Birmingham.

“It is hard in our day in age to appreciate it [military sacrifice], because we live in a world of abundance,” Hayes said. “Compared to all of human history, we have it really good. History is one horrendous affair after another, but that is no longer the case.”

He went on to explain why he believes that is so.

“A superpower came into existence like no other,” Hayes said. “One that was built on the belief that every man was created equal and that every life has value.”

However, he also it made clear that the U.S. has also done its share of mistakes in the past, but what separates them from previous world powers is its search for redemption. 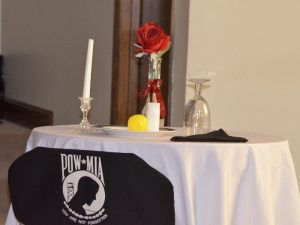 A missing man table was setup on the stage. It represented those who lost their lives in combat or as prisoners of war and were unable to make it back home. (Photo by Anthony Richards)

“No one is in the same zip code to the good that America has done,” Hayes said. “We ushered in a reality where peace and abundance is the expectation.”

Hayes’ final remarks urged both students and faculty in attendance to remember the burden that brought about their freedom and joy.

“That burden will not go away,” Hayes said. “Other folks will just have to take it up.”

The ceremony included patriotic songs and the honoring of veterans on stage that had been invited by CCA students.