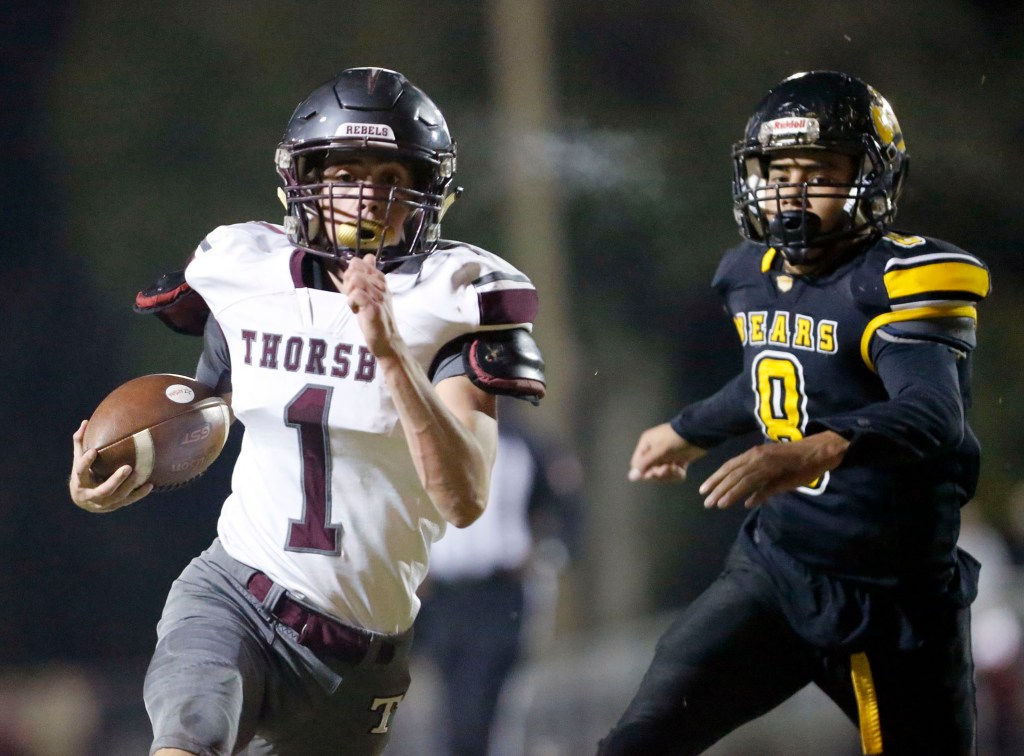 The 2019 regular season came to a disappointing end on Nov. 1 for the Billingsley High School seniors, as the Bears dropped their final home game before the playoffs to the Thorsby Rebels 42-13.

Having one the opening coin toss, the Bears looked poised to put the first points of the contest on the board with their opening drive.

However, a fourth and goal at the Thorsby 3-yard line would see a pass attempt from quarterback Taylor Arington fall into the hands of a Rebel defender, pulled in a for an interception and would set Thorsby up with their first possession at their own 20.

A pair of Thorsby first downs would move the Rebels out near midfield, where a 50-yard pass connection from Brody Barnett to Tyler Ray would move Thorsby down inside the Billingsley red zone. One play later and Barnett would find pay dirt from 5 yards out to give Thorsby an early 8-0 lead.

The ensuing Billingsley possession would see the second Bear turnover on the evening as the Rebels defense would come away with another interception inside their own red zone and would set up their offense for their second possession of the night at their own 36.

This time the Billingsley defense would stand tall to force a three and out while taking over at their own 38, where the Bear offense would put together their first scoring possession of the evening by driving 68 yards and capping the drive with a 1-yard touchdown carry by Levi Arington that would make it a 8-6 Thorsby lead late in the second quarter.

Thorsby would answer however with a 64-yard scoring drive of their own that would see Jacob Lockhart go in from 15-yards out to make it a 16-6 lead with 1:56 to play in the first half.

The Rebels were not quite done for the first half, as a muffed kickoff by the Bears would fall into the hands of Thorsby and would set the Rebels up first and 10 at the Billingsley 36. Six plays later and Barnett would connect with Ray for a 29-yard touchdown connection that would make it 24-6 Rebels at the half.

Thorsby would keep their offense clicking to start the second half, as a 64-yard touchdown drive would be capped on a 9-yard touchdown carry by Lockhart that would extend the Rebel lead to 30-6 early in the third quarter.

Billingsley would advance as far as the Thorsby 27-yard line on its next possession, but a fumble by the Bears would be recovered by the Rebels and would set Thorsby up first and 10 at their own 12-yard line.

The poor field position would little to slow down the Thorsby offense, as a big first down reception by Sawyer Sellers would see the Rebels move across midfield down to the Billingsley thirty-three. However, the Bear defense would keep the Rebels out of the end zone on this possession as the drive would stall at the Billingsley 29-yard line.

A three and out by the Bears would turn the ball back over to the Rebels at the Billingsley 40, where three plays later Barnett would connect with Ray for the second time on the night, this time from 32-yards out, to put Thorsby out in front 36-6 early in the fourth quarter.

Another quick three and out by Billingsley would once again give Thorsby the short field, and it would waste little time putting more points on the board as the first play of the drive would see Barnett connect once again with Ray from 19-yards out to make it a 42-6 Rebel lead with 8:27 remaining.

The Bears were not quite ready to throw in the towel and would use their ensuing possession to put together a 67-yard scoring drive that would end on a 1-yard touchdown run by Taylor Arington that would bring the game to its final score of 42-13.

Barnett finished the night with 185 yards through the air on 8 for 13 passing with three touchdowns and added another 70 yards on the ground along with a rushing touchdown. Ray hauled in five of Barnett’s completions for 127 yards and three touchdowns.