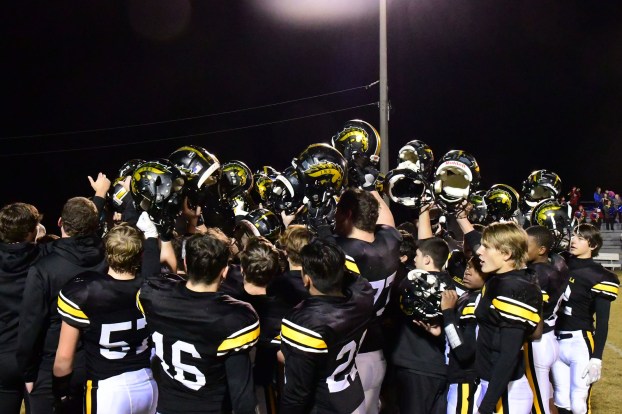 The Mustangs huddle up after defeating Verbena. (J.R. TIDWELL/ADVERTISER)

All that was standing in the way of the Isabella Mustangs completing a 10-0 regular season were the Verbena Red Devils.

IHS scored early and often to put the game away before halftime, and with the 53-6 victory on Nov. 1, Isabella earned its first undefeated regular season since 2002.

This also marks only the second time the Mustangs have notched a 10-0 record in school history going back to 1927.

“It feels great,” said Isabella head football coach Tate Leonard. “It is a very big deal for any team, and it’s certainly a big deal for us. I am very thankful and blessed.”

It took less than a minute for the Mustangs to get on the board. Quarterback Cole Atchison connected with wide receiver Kendall Reeves for a 36-yard touchdown pass. Three minutes later Atchison made a 45-yard run for a score to put Isabella up 13-0.

Verbena lost a fumble on its first offensive play of the next drive, but Isabella gave it right back with a fumble at the start of its possession.

Lance Price rumbled into the end zone from 37 yards out to make it 20-0 Mustangs with four minutes left in the opening quarter.

A 23-yard run by Dalton Mims set up a 2-yard touchdown plunge by the senior to make it 26-0 IHS by the end of the first.

Braxden Giles had a hand in each of Isabella’s next two scores. He ran in a touchdown from 9 yards out and connected with Atchison on what turned into a 42-yard catch and score after Giles weaved through Verbena traffic.

A 68-yard pick-six by Ben Martin made it 46-0 Mustangs and marked the first of two interceptions returned for touchdowns by Isabella on the night.

The next came a little over three minutes later when Zack Chapman hawked a pass and brought it back 57 yards for a score.

IHS led 53-0 at the break, and the second half was shortened to two six-minute quarters with a running clock.

Neither team scored in the third quarter, but Verbena finally found the end zone with about four minutes remaining in the contest when Nathaniel Morris capped a drive with a 4-yard touchdown run.

Verbena finishes the 2019 season 2-8 with a win over Ellwood Christian and a forfeit victory over Highland Home, who played an ineligible player.

Isabella earned the Class 1A, Region 3 title and will host in the first round of the state playoffs.

“We are going to enjoy (going 10-0) until about midday (Saturday), and then it’s a new season,” Leonard said. “All of this will be looked back at later, and it was great fun, but it is a brand new season. We are looking to try and be 1-0 next week.”

The Mustangs’ opponent will come down to a tiebreaker between Notasulga, Billingsley and Wadley.

“We have got to be focused and hungry,” Leonard said of the upcoming playoffs. “We have to give everybody our best shot to have a chance. Everybody (Isabella players) has got to be all in. If they do that, good things are going to happen.”

The final week of the regular season is upon us, which means that another football season has gone by in... read more