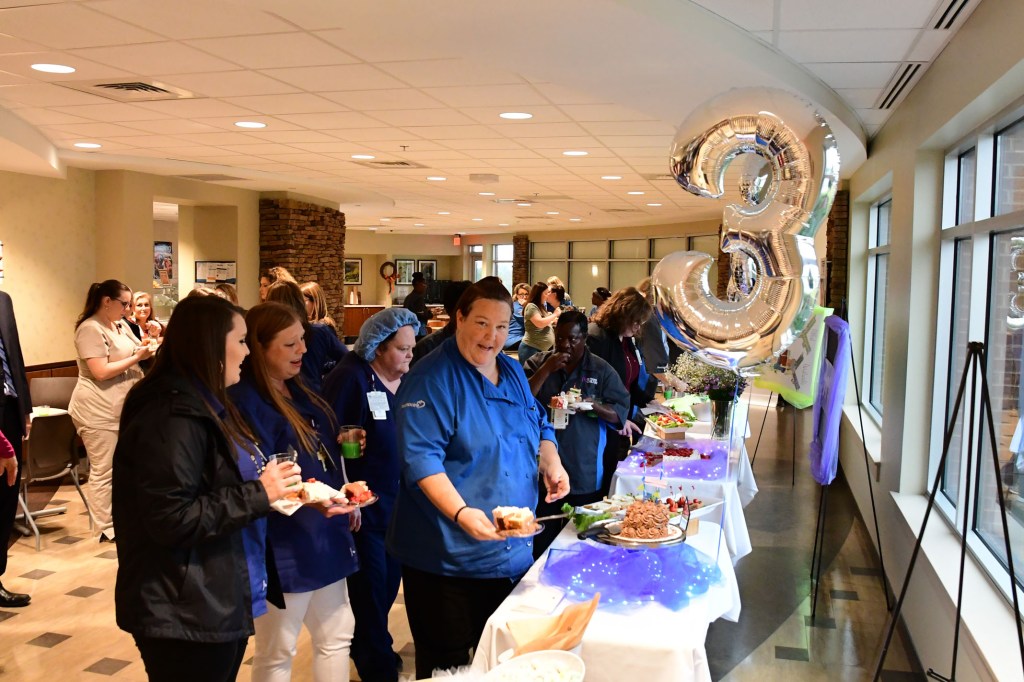 Staff at St. Vincent’s Chilton walk through a line collecting goodies during a celebration of the hospital’s third anniversary on Oct. 30. (J.R. TIDWELL/ADVERTISER)

It has now been three years since St. Vincent’s Chilton in Clanton opened its doors to patients.

Administration at the hospital hosted a celebratory gathering for staff in the main lobby Oct. 30 in commemoration of the event.

Overseeing the event was Administrator Shanon Hamilton, who stepped up into that role four months ago.

“It is certainly a privilege for me to be here in this capacity,” he said. “I certainly appreciate all the effort our staff, associates, the Chilton County Health Care Authority board, the Chilton County Commission and the elected officials here have invested, so much time and energy, getting this hospital to where it is today.”

Three separate tables were set up with different types of cake and other goodies on each.

The theme of the celebration was past, present and future, with each table representing one of those time periods.

“The next step is moving toward the future,” Hamilton said. “I think we have done a really good job here representing the past, present and future at our 3-year anniversary.”

The “past” table featured a design plan showing the layout of the hospital before it was built.

The “present” table showed a picture of the way St. Vincent’s Chilton looks now after adding some new features like physical therapy.

“We have performed nearly 7,000 surgeries, registered 95,000 patients, performed 85,000 imaging procedures and almost 400,000 lab procedures,” Hamilton said. “The community is trusting us with their care. We always want to grow and do more to provide a greater service for the residents of the county and the surrounding area. I think what we have done to this point speaks for itself.

“Our patient satisfaction scores are some of the highest in the country. We have great associates working here and physicians that choose to practice here. They do a wonderful job. It’s the patient’s choice, and we want them to choose us. Not because we are local, but because we provide exceptional care, exceptional patient satisfaction and an experience they may not be getting somewhere else.”

The “future” table was not adorned with any photo, however, representing the freedom the hospital has in moving forward.

“If you saw the cake (on that table), it was titled ‘limitless,’” Hamilton said. “Our future is really limitless. I don’t have the future represented by anything specific, because it’s kind of a question mark. The hospital’s future is really what we determine it to be. There are so many options and so much opportunity that I didn’t want to confine it to one specific idea or concept. It is waiting out there for us to define it.”

Hamilton said that St. Vincent’s Chilton will be listening to its patients in order to help determine where the hospital will go from here.

“An example is our sleep lab. People were leaving this community to go to other locations to have sleep disorders diagnosed, so we decided that it would be an easy win for us to develop a sleep disorder centers here at St. Vincent’s Chilton. We did that almost a year ago this month, and we have seen almost 300 patients in that year. We have an accredited sleep lab through the American Academy of Sleep Medicine.”