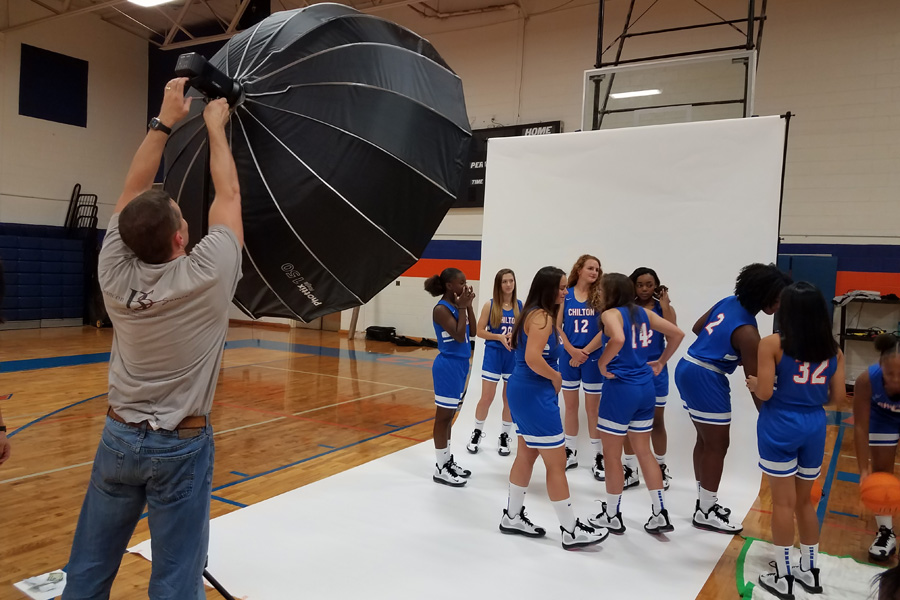 Members of the 2019-20 CCHS girls basketball team took part in a photo shoot and media day on Oct. 26. (Photo by Anthony Richards)

The high school basketball season is set to begin in the next couple of weeks, and the CCHS girls basketball team did their part to build upon the anticipation by hosting a media day on Oct. 26.

The media day is just one of the recent things that first-year head coach Paul DuBose has done to help build team comradery and awareness of who they are within the local community.

The Tigers are a relatively young team with Jasmine Martin the lone senior and only four girls that have varsity experience.

“We’re still learning a lot and we’ve been breaking down every phase of the game,” DuBose said. “It’s taking time, but the effort and enthusiasm is there. We’re making strides.”

According to DuBose, it can be difficult to get seniors to embrace a new coach’s philosophy and approach.

“Jasmine has bought into the team culture we are trying to do, and has so far been a dream to coach,” DuBose said. “She likes to lead by example, but I’ve also challenged her to be more of a vocal leader as well.”

DuBose has not coached girls basketball since being the head coach at Fultondale High School in 2014. He helped lead that team to the school’s first area title.

“It’s been a while since I’ve blown the whistle,” DuBose said. “It is literally like I’m Gene Hackman in ‘Hoosiers.’”

He hopes to implement a defense-first mindset while adapting the style they play to their team personnel.

“We have a lot of athletes, so the goal is to play a fast game, but with our inexperience, you are going to see us go through phases,” DuBose said. “By the end of the year, you’ll see the complete version of a team that plays multiple defenses and plays good team ball.”

Martin has been witness to a lot of turnover during her career at CCHS, including getting ready to play for her third head coach in four years.

However, she expressed that although DuBose has only been in charge of the program since being hired in May, he seems like a natural fit.

“Coach [DuBose] has just jumped right in,” Martin said. “It feels as if he’s been here my whole time through high school.”

On top of the changes to the coaching staff, Martin is also returning to the court following an ACL injury.

According to Martin, the adversity she faced with that injury and the rehab process involved will help her to better withstand adversity that she or the team may experience this season.

“Anything that happens in the game, I would have been through much worse with my injury,” Martin said. “Sitting on the bench last year gave me a whole new perspective of the game and how things go. There’s no excuse that we can’t do it.”