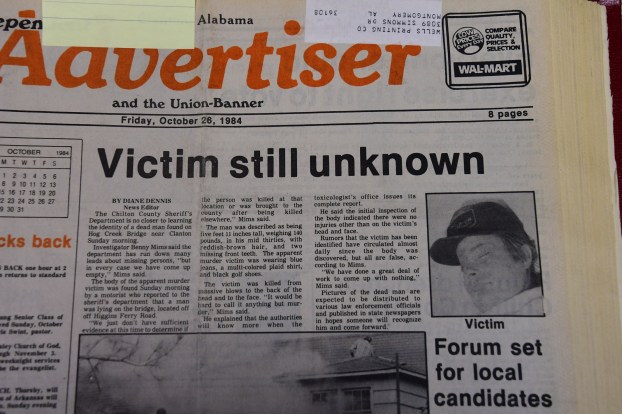 Authorities took the clothes found on the Hog Creek Bridge murder victim and attempted to reconstruct his appearance in the hopes someone would recognize him.

On Sunday, Oct. 21, 1984, a motorist found the body of a man lying on Hog Creek Bridge, just off of Higgins Ferry Road, in Clanton.

The man had been beaten to death, with major trauma to his face and the back of his head.

The motorist contacted authorities, and the investigation that began that day would take just over three years to come to a resolution.

Multiple stories ran in the Clanton Advertiser, then called the Independent Advertiser, over the course of that time. The dates those stories ran on appear and pertinent information they contained appear below.

The case would involve a vast effort by authorities both in Chilton County and across the Southeast to find both the identity of the victim and the person responsible for the crime. 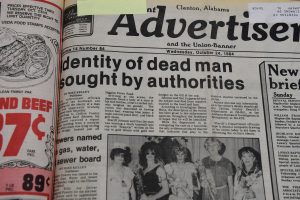 The first story out of many published about the murder victim found at Hog Creek Bridge ran in the Independent Advertiser on Oct. 24, 1984.

Authorities seek the identity of a man found beaten to death on Hog Creek Bridge.

The man was wearing a black baseball cap with the words Snap-On written in gold. The cap also featured gold leaf designs. He had no identification on him.

Johnson said that it appeared the subject had died from massive injuries to the head and face.

According to investigator Benny Mims, the description of the victim had been given to law enforcement agencies throughout the southeast in hopes that he would be identified. 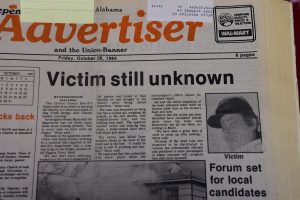 Authorities took the clothes found on the Hog Creek Bridge murder victim and attempted to reconstruct his appearance in the hopes someone would recognize him.

Mims said that his department had run down many leads as to the identity of the victim, “but in every case we come up empty.”

“We just don’t have sufficient evidence at this time to determine if the person was killed at that location or was brought to the county after being killed elsewhere,” he said.

Further information on the victim was given. He was missing his two front teeth and had suffered “massive” blows to the back of his head and face.

Given the state the victim was found in, Mims said that it would be “hard to call it anything but murder.”

Authorities were awaiting a toxicology report for more information on the victim’s state at the time of death.

An initial inspection showed no injuries besides the ones to the head and face.

The Sheriff’s Department said that many false rumors had begun to spread around the county about the body being identified, but they were all false.

More than 100 inquiries into missing persons throughout the Southeast went through the Sheriff’s Department, but none led to the victim being identified.

The victim’s description was given to authorities in all 50 states in order to widen the net in the search.

The victim was successfully fingerprinted, but those identifying marks were not on file with any agency in the state, meaning it was another dead end.

The next step was to check across the United States to see if those prints were on file anywhere.

The FBI said that process would take three to four weeks.

It was determined that some kind of metal object had been used on the right side and back side of the victim’s face and head, and those areas were crushed in.

The identity of the victim remained a mystery. The Sheriff’s Department had run down scores of leads, but they had still all proven false.

The FBI said it would be another month for the nationwide fingerprint check to be complete.

According to authorities, there was no sign of struggle at Hog Creek Bridge, meaning the victim could have been murdered there or killed elsewhere and dumped at the location.

“We are still checking ever lead we receive,” Johnson said. “So far, every time we think we have an identification it turns out to be the wrong man. 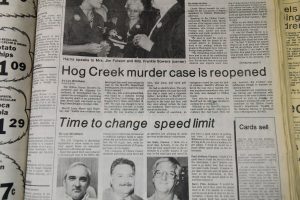 The case was reopened in 1986 after an informant tipped off authorities as to the possible identity of the murderer.

The Hog Creek Bridge murder case went cold due to lack of evidence.

However, the case was reopened almost two years later by authorities.

“Hostile new evidence has developed this week concerning the case by the Sheriff’s Department investigators, which caused the case to be reopened,” said Sheriff Louis Moore.

Sheriff Moore would not release the nature of the information that caused authorities to reopen the case, though he did say it was substantial enough to merit doing so.

Some further information about the victim was given out.

The only items the man had with him were a comb and a cigarette lighter.

Sheriff’s officials believed the man was a vagrant who was murdered somewhere else and dumped at bridge.

The identify of the victim remained a mystery, and no arrests had been made in connection with the case.

According to Chief Deputy Mims, the victim was beaten so badly it would be hard for his own family to recognize him. 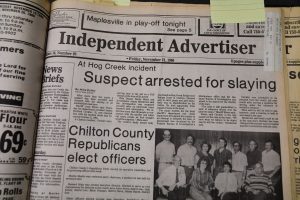 James Richard Cleckler, age 32 in November of 1986, was arrested and charged with murdering the unidentified victim found on Hog Creek Bridge.

After more than two years of investigation, a breakthrough was made and a suspect was arrested in connection with the case.

Sheriff Moore said his department arrested James Richard Cleckler, 32 at the time, and charged him with murder.

Cleckler was a resident of Clanton and was serving time in the county jail for a DUI at the time of his arrest.

An informant had come forward with information on the case, which led to Cleckler’s arrest. He remained the only suspect.

Cleckler was to be released within a week or so for the DUI, but the evidence presented against him and the subsequent charge meant he would remain in jail.

“We have what we believe to be the object used to kill the victim,” Investigator James Henderson said.

Cleckler was to be held at the jail until his hearing.

Cleckler was bound to a grand jury by District Court Judge Marise Mims. He was still being held in jail on a $100,000 bond.

Benny Mims said, “We charged Cleckler with the murder of the ‘John Doe of Hog Creek Bridge.” 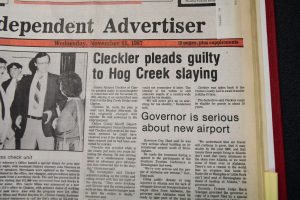 James Richard Cleckler plead guilty to murdering the unidentified victim in November of 1987. He was convicted of manslaughter and sentenced to life in prison.

The court proceedings drug on for almost a year before Cleckler plead guilty to slaying the victim.

He was found guilty of the lesser charge of manslaughter but still received a life sentence.

Henderson said Cleckler received the maximum penalty even if the charge had not been reduced.

Due to his confession, Cleckler shed light on many unknown details of the case.

Henderson said Cleckler admitted picking up the victim and riding around with him the night of the slaying.

“They were drinking, and Cleckler said the victim pulled a knife on him. He used a bumper jack to beat the man to death,” he said.

The victim remained unidentified throughout the case.

Cleckler told authorities the victim had told him his name, but Cleckler could not remember it.

“We will never give up on searching for the identity,” Henderson said.

Cleckler was to be transferred to Kilby Prison and would be eligible for parole in about 10 years.

Now, some 35 years later, the identity of the man found murdered on Hog Creek Bridge remains a mystery.

According to Chilton County Sheriff John Shearon, the victim’s body was exhumed a few years ago and sent to an office in Texas.

The hope was to finally identify the man using mitochondrial DNA.

The attempt, like so many others before it, failed to produce an answer.

The Back Forty venue open for business

By J.R. TIDWELL / Editor People in Chilton County who are looking for a place to hold a special event... read more