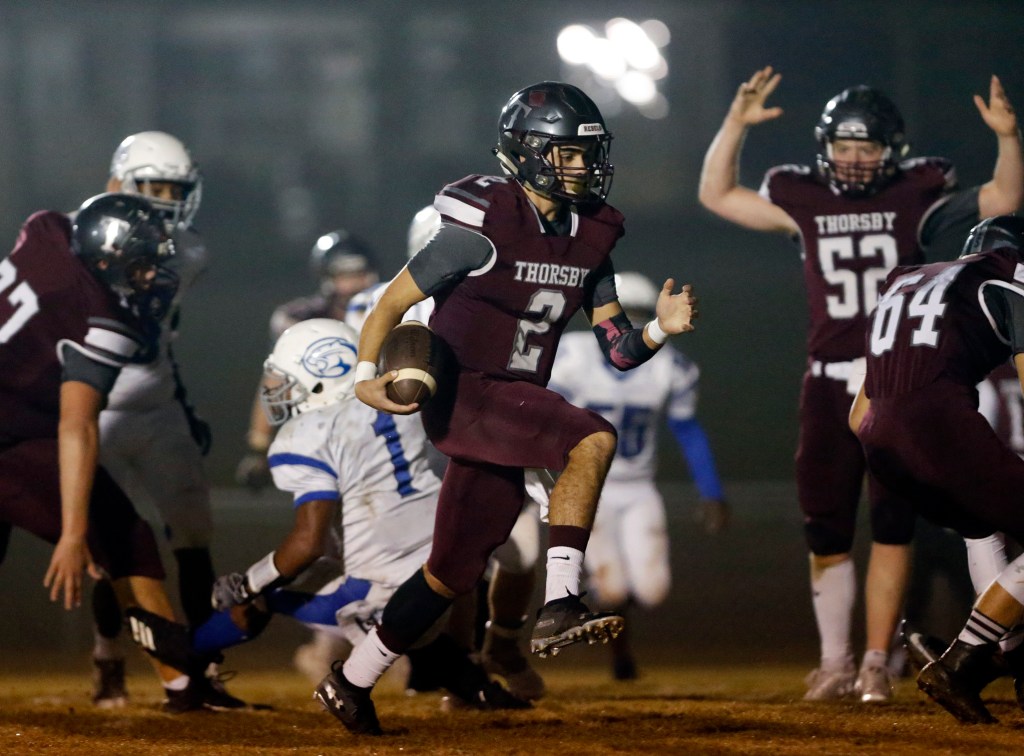 It did not take long for the Thorsby Rebels to put away the Central Coosa Cougars Oct. 25.

THS would score more points in the opening quarter than the Cougars would tally throughout the game, and the Rebels rolled to a 56-20 win on senior night to close out their slate of region games.

“The guys did what we wanted them to do,” said head coach Daryl Davis. “We knew we felt good about this game, so I told them I wanted to go out early and (get ahead) so we could put some second- and third-string guys in there and get them some time.”

The Rebels ran all over the Cougars during the night. Brody Barnett got THS on the board early with a 3-yard run followed by a 7-yard rush and score to make it 14-0 midway through the first.

A.J. Smith carried in the next score from 21 yards out, and a conversion pass from Barnett to Tyler Ray made it 22-0.

Central Coosa managed to get on the board when a long pass deflected off a Rebel defender right into the hands of a Cougar receiver, who then sped into the end zone.

A 39-yard touchdown scamper by Barnett started off the second quarter.

About three minutes later Jacob Lockhart made an interception in Rebel territory and returned it to the Cougar 14.

That set up a 10-yard run and score by Blake Lockhart two plays later, which put Thorsby up 36-8.

A 44-yard touchdown pass from Barnett to Jacob Lockhart made it 42-8, but the Cougars returned the ensuing kickoff 73 yards for a score.

Thorsby managed to drive the field and score one last time before intermission when Barnett connected with Ray on a 22-yard touchdown pass that made it 48-14.

The second half was shortened to eight-minute quarters with a running clock, so the action was limited for the rest of the contest.

The Rebels’ final score came on a 26-yard touchdown pass from Luke Davis to Caleb Davis, and the Cougars managed another touchdown just before time expired to set the final.

Thorsby (5-4, 4-2 Class 2A, Region 4) wrapped up third place in the region and will travel in the first round of the state playoff in two weeks.

Before that the Rebels will face Billingsley away in the regular-season finale.

“We are going to try and take the momentum into next week and into the playoffs,” Davis said. “We just found out yesterday we are playing a different team than what we had started looking at and preparing for. We will be playing Goshen.

“This senior bunch has been in the middle of some special things at Thorsby. For one thing, it is the first group of seniors that have been to the playoffs three years in a row. We are proud of them, but we are going to go back to work Monday to get ready for Billingsley.”

Many high school football teams in Alabama rescheduled Friday night games set for Oct. 25 for Thursday trying to get around some potential messy weather.

Thorsby was one of the holdouts that left its contest on Friday, and while conditions were a bit wet and muddy, the wind and rain stayed away throughout the contest.

“Thank God the weather held off,” Davis said. “We couldn’t have asked for better weather for the game.”