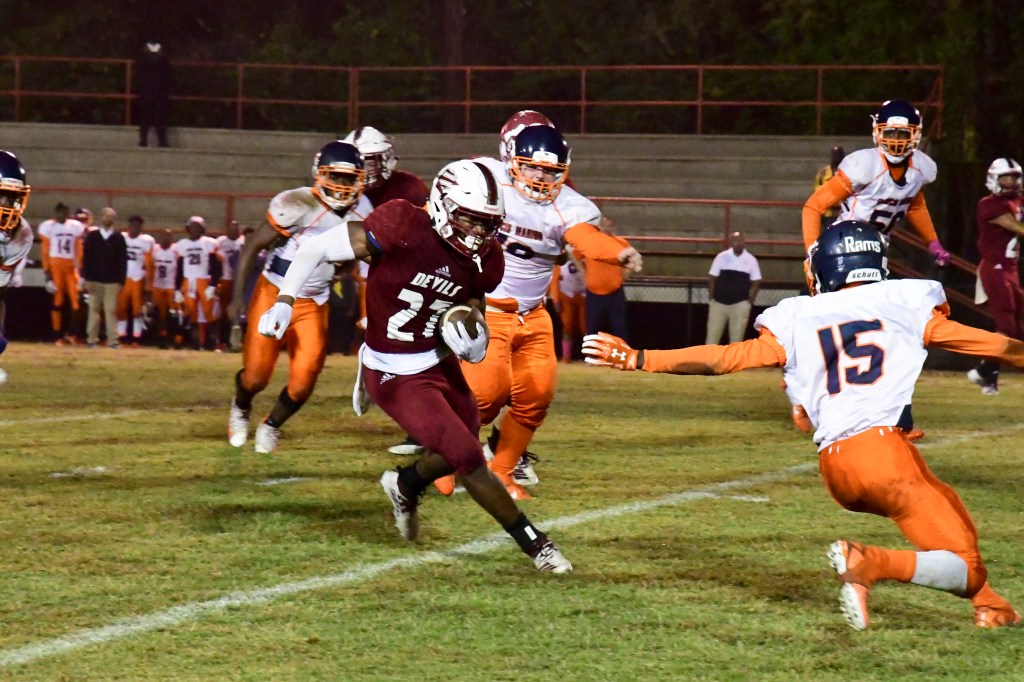 Maplesville wrapped up second place in Region 3-1A after a resounding 55-0 victory at home against Francis Marion on Oct. 25.

“The best practice we’ve ever had was Wednesday, and then we just came out and showed up,” Maplesville junior Brandon Pickle said. “It means a lot to all of us.”

The defense turned in a commanding performance en route to the shutout.

Pickle continued to have a magnet for the ball as he intercepted his second pass of the season and is becoming a ball hawk on defense.

“Tonight’s the best game I’ve ever played,” Pickle said. “I look up to Taylor Sheffield, and he’s the one who has taught me a lot of the stuff that I know.”

Relentless pressure was key to Maplesville’s success all night long. Timber Lenoir led the way with a pair of sacks and tackles for loss.

“We knew they wanted to pass, and just wanted to keep our foot on the gas,” Lenoir said. “It’s really all about continuing to preach the ‘next man up’ philosophy.”

However, the defense did not stop there and also helped provide points following Ryan Morrow’s 34-yard scoop-and-score after a strip sack early in the third quarter.

The defensive touchdown put Maplesville up 41-0 after the Red Devils led 28-0 at the halftime break.

Morrow added to his productive night with three rushing touchdowns and 92 yards on 14 carries, while his backfield mate Latrell Wilson had 99 yards, most of which came on a 64-yard scoring gallop in the second quarter.

Abbott’s touchdown strikes were delivered to Kayln Hardy and Morrow.

On the night, Maplesville’s offense outgained Francis Marion by 320 yards.

As region runner-up, the Red Devils will host a first-round playoff matchup on Nov. 8 with Billingsley being the projected opponent.