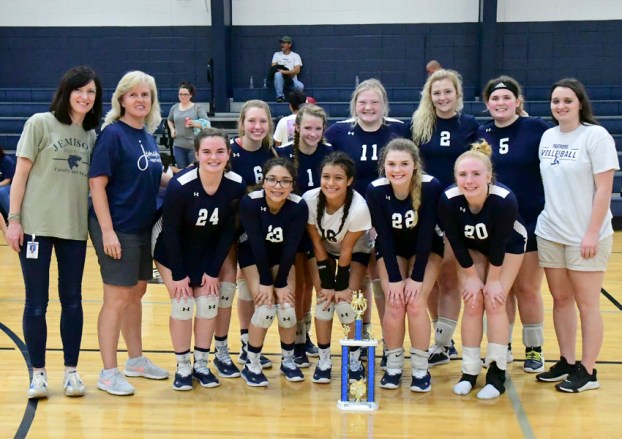 The Jemison Panthers defeated Marbury to win the 2019 Area 6-5A tournament championship on Oct. 24. (Photo by Anthony Richards)

It was the Panthers first area volleyball title for quite some time and one that would have been a surprise to most people, especially after a season of struggles a year ago.

“Every game we seem to be able to pick ourselves back up,” Jemison senior Grace Autery said. “We did it again. It was just crazy.”

The game came down to the wire after Jemison jumped out to an early lead after taking the first two sets before Marbury bounced back to claim the third and fourth sets.

“I think after the first two games, they got a little comfortable,” Jemison head coach Kelsey Mims said. “I challenged the seniors and told them to give me everything they had for 15 more points.”

The tension was palpable throughout the JHS gymnasium heading into the fifth and final set.

Despite the high-pressure situation, it was nothing new for the Panthers, who had shown a knack for continuing to fight until the end of games.

“The drive in this team is nothing like I’ve ever seen before,” Area 6-5A tournament MVP Caroline Foote said.

Jemison took a 9-8 lead in the final set following a double-team block, as Shelby Crowson and Kinley Copen leaped to create a wall above the net.

Foote was named tournament MVP, as she helped lead the way with 27 kills in the marathon match against Marbury and 37 total for the tournament.

Foote was joined on the all-tournament team by teammates America Gutierrez and Autery. Gutierrez finished the tournament with 42 assists, while Autery had 34 digs.

Autery tallied her impressive digs count by routinely doing her job to dive on the floor after balls, despite favoring her arm throughout the contest. 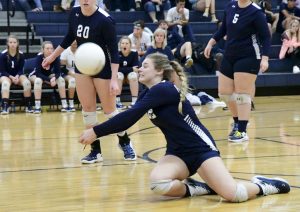 Grace Autery dives for a ball despite playing with a possibly torn labrum. (Photo by Anthony Richards)

“It started bothering me a few games ago, and I’ve been going to physical therapy,” Autery said. “They think I tore my labrum, but my mentality is too keep going because I’ve got to play my senior year.”

The Panthers won the second set by 11 points, in large part because of a hot start fueled by Brooke Smith’s service game.

The area championship came just a couple of weeks after the Panthers won the county title.

“We’ve won every tournament we’ve been in,” Autery shouted with joy. “It’s been an amazing senior year so far. After the first few games we won [this season], I knew this team was great, and we could go far.”

Next up for Jemison is a trip to the AHSAA Class 5A South Super Regional at the Multiplex at Cramton Bowl in Montgomery. The Panthers will face Charles Henderson High School at 9 a.m. on Oct. 24.

“We just want to go down there and try to win a game, and we’ll see what happens from there,” Mims said.

Tanner Jones recently announced via Twitter that he has committed to play baseball at Jacksonville State University. The decision-making process... read more