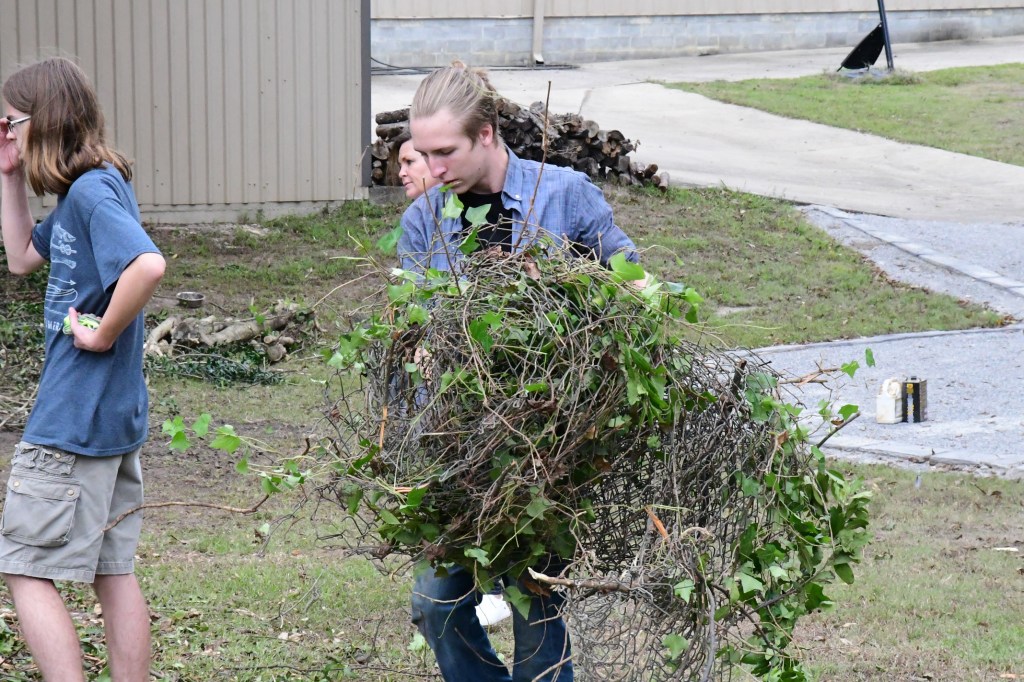 Passersby in Clanton may have noticed a group of people, mostly teenagers with some adults, cleaning up an area on the property owned by Clanton First United Methodist Church on Oct. 21.

That group is part of a community service project being led by 17-year-old Dakota Rabren, though everyone calls him Tiger.

Tiger and other volunteers were giving up their day out of school to work on the cleanup.

Tiger is trying to work towards the rank of Eagle Scout, and a service project is one of the requirements.

When looking for potential projects, Tiger needed to look no further than his church home for inspiration.

“I asked the church if there was any way I could fix up the area,” he said. “It was a mess. You couldn’t see from (one side) to the other. There was a line of brush you could see on the ground.”

The area sits adjacent to a project completed by Connor Sims as part of his Eagle Scout requirements.

Sims’ efforts led to the placement of a fire ring next to a storage building owned by FUMC.

Tiger’s project looks to improve the site even further which will be more than simply cleaning up brush and debris, including old tires, a broken grill and chain-link fence.

“We are going to build a woodshed to store the wood and keep it out of the rain (for the fire ring),” Tiger said. “We are also going to add disc golf. (Connor) built this, and I wanted to add onto it. It is always nice to add on to another project and get some improvement in the area.”

Tiger’s mother, Shannon Fox, also said the project will improve pressure washing the area around the building and fire ring, as well as maybe some tree removal.

“The church has asked us if there is any way possible we could remove all the trees (in the location), so I put out a plea on Facebook now to see if we can get some volunteers to come move these trees,” she said.

Tiger said he was a “late joiner” and has only been in Scouts for five years now. He hopes that when his project is done it will be something good for his church.

“You don’t always see the best of a place when you go, you see what looks bad,” he said. “If we take away the bad, you only see the good, right?”

Tiger said he hopes to have the project done by the middle of November.