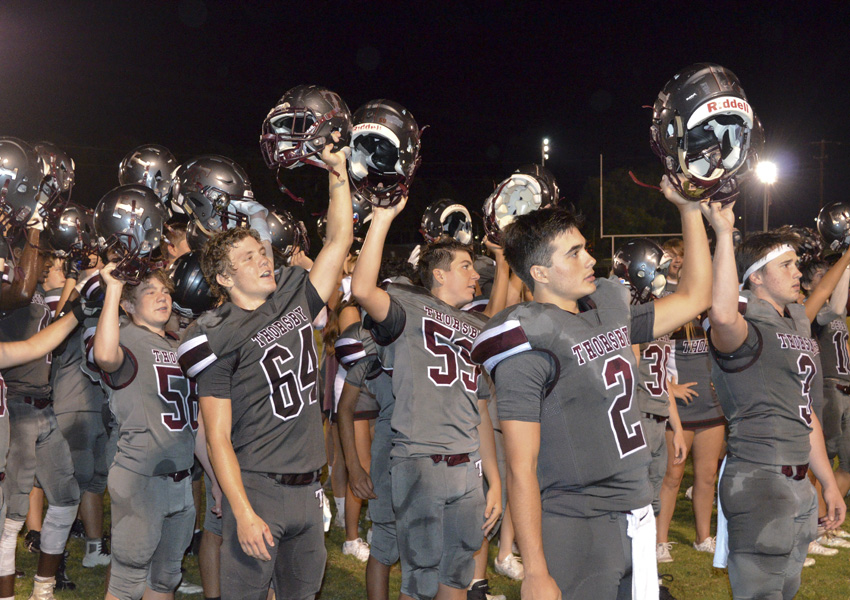 Thorsby improved to a record of 3-2 in region play with a win over Fayetteville on Oct. 10. (File photo)

Brody Barnett found success both on the ground and through the air with a total of 228 offensive yards, including three rushing touchdowns.

Of Barnett’s 136 passing yards, fellow junior Sawyer Sellers was on the receiving end for 73 of them.

Tyler Ray cashed in on a couple of turnovers by returning an interception and a fumble for touchdowns.

Not only was it the a fifth-consecutive win but the Bears also remained undefeated in Region 4-1A.

Brisen Tatum started his second-straight game at quarterback for the injured Levi Arington and continued to showcase his athleticism.

Tatum ran for 132 yards and three touchdowns as Billingsley stuck to the ground game on offense.

Another dimension of the rushing attack included Taylor Arington, who also broke the century mark with 101 yards and a score on just seven carries.

Kylan Thomas led the Bears with 10 tackles, while Jontavies Todd picked up a fumble and returned it to the house.

Overall it was the Tigers’ fourth defeat of the season and second straight.

Lawson Patterson intercepted a pass, while Russell Rhodes, Sergio Romero-Rodriguez and JaKobi Albert each recovered a fumble in the game.

However, the Tigers were oftentimes unable to convert the sudden changes of possession into points.

One of the only other bright spots offensively was the play of Devonte Robinson, who gained 104 yards on 18 carries.

A major reason for the Panthers’ midseason swoon they find themselves in has been a struggle to score points.

Jemison has scored 25 points in its last three games, which is a big difference from the 88 points scored in its first three games.

However, the offense has experienced some injuries to key players in recent weeks, including starting quarterback Daniel Martin, which have also come during the meat of the Panthers’ schedule.

For the fifth-consecutive game the Verbena Red Devils were shutout by an opponent following their 67-0 loss on the road against Notasulga.

On the other end of the spectrum, Verbena has allowed an average 51.6 points per game during that stretch.

However, although the stats tell a rough story, it is important to remember that the Verbena program is currently at a different level than most of the teams they are going up against on a weekly basis and expectations must be adjusted accordingly.

Signs that the program is moving forward are there, but not yet to the point where the stat sheet reflects those gains.