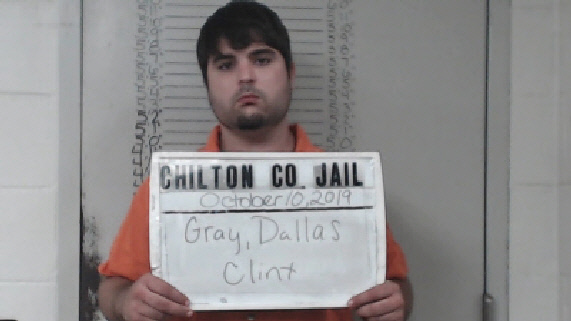 A vehicle hitting a dog in Verbena Oct. 9 led to an altercation that left one person dead and another in critical condition, according to Sheriff John Shearon of the Chilton County Sheriff’s Office.

Shearon said deputies responded to a residence on County Road 480 around 10:44 p.m. where a caller allegedly claimed he had been shot in a drive-by shooting.

Shearon said once CCSO was on the scene it became apparent the shooting was not a drive-by, and the events that led to the shooting were much more complicated than that.

According to witness testimony, someone hit a dog with a vehicle and attempted to make contact with the probable owner of the animal.

Shearon said the person who hit the animal left and was no longer involved in the incident, but the events led to Dallas Clint Gray, 23, coming into contact with a homeowner who is presumed to have been the dog’s owner.

Gray and the homeowner allegedly got into an altercation that eventually turned into shots fired.

Shearon said the homeowner is believed to have fired the first shot and Gray returned fire, but the investigation is still ongoing.

The homeowner was hit and called 911. Shearon said at last update the homeowner, a male, was at a hospital in Birmingham in critical condition.

While members of CCSO were investigating the scene and attending to the homeowner, Shearon said he turned down nearby County Road 813 before finding a deceased female that is believed to have been hit by a stray bullet fired by Gray.

Shearon said after collecting evidence Gray was taken into custody.

According to online records, he has been charged with murder of a non-family member.

No further information is available at this time.