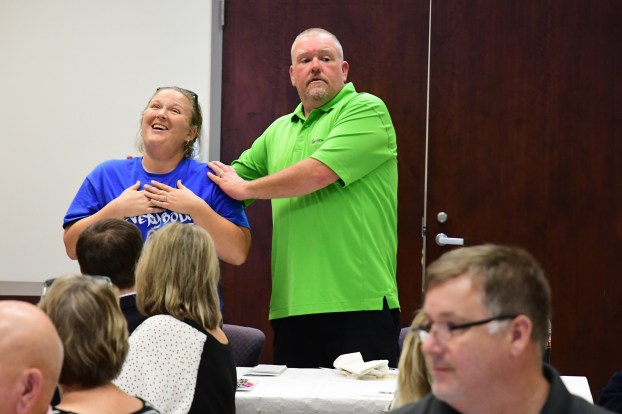 Chubbfathers owner Will Cholewinski and his wife tell the crowd about their new upcoming restaurant at the Chamber luncheon Oct. 8 (J.R. TIDWELL/ADVERTISER)

For Chubbfathers restaurant owner Will Cholewinski, feeding the people is his calling.

One only has to look at those words tattooed down his right forearm to get a sense of his conviction.

Cholewinski, AKA the Chubbfather, is opening up a second location of his restaurant in Clanton. The original location is in Alabaster.

“My food journey started very young,” Cholewinski said. “My father and mother raised me with a servant’s heart. We had pretty much everything we needed, but very quickly lost everything we had. I started selling Easy Bake Oven cakes at (age) 8 to help pay the power bill. The Lord told me somewhere around 7 or 8 that feeding the people would be my responsibility. My love of cooking comes from being in a big Polish family and sitting at the counter cooking.

“I have run several multi-million dollar restaurants and catering companies. I have a radio show we do Saturdays on 99.9 FM. Our live show is called ‘Breaking Bread with A.J. and the Chubbfather.” We do food talk.”

“We do burgers, wings, fries, tenders and po boys,” he said. “The bread comes in for the phillies from Philadelphia, and the bread for the po boys comes from New Orleans. The shrimp come from the gulf. You are not going to leave hungry. You can come and eat as healthy as you desire.”

Cholewinski said Chubbfathers has been featured on Food Network and the Travel Channel.

He said he and his wife wanted to open a new location in Clanton because they are familiar with the area.

His wife is from Verbena, and his father-in-law lives “right around the corner” from the new location, which will be in the space formerly occupied by Texas Steakhouse.

Cholewinski said it was Mike Graham of Pies by Mike in Clanton that told him about the location’s availability after another restaurant recently closed its doors.

“We have always talked about it,” Cholewinski said. “When we were first together, we would ride into town. It just always struck me as a place I like. I like old school downtowns with mom and pop businesses. I knew when we got ready to grow that I didn’t want to fool with Birmingham or Jefferson County. I really felt like if we came south, I was looking for a community we could be a part of and make a difference.”

Feeding the people means more to Cholewinski than simply owning a restaurant. He has a program at his establishment that collects items for local food banks in order to help provide meals for those who need them.

“We exist to be our brother’s keeper,” he said. “The day I found out we had donated our first 5,000 meals to food banks in Alabaster, there was no coincidence the gospel at church was the multiplication of the loaves and the fish feeding 5,000 people.”

The program, aptly named the Feed the People initiative, invites customers to bring in items in exchange for free beverages and eventually meals.

“You bring me two nonperishable food items or two unused toiletries,” Cholewinski said. “That gets you a free drink. We give you a rewards card, and each 15 times you do that you get a meal on the house. At the end of the week, or when the box gets full, we go and match its contents. It goes to the people in the community that need it.

“There is a need. It is very well hidden because of the affluency of the area (in Shelby County). There are a couple hundred families in the school system that we help provide a full week of food for on a regular basis.”

Chubbfathers’ new location is set to open for lunch sometime during the middle of November, Cholewinski said. Full lunch and dinner service will begin on Dec. 1.