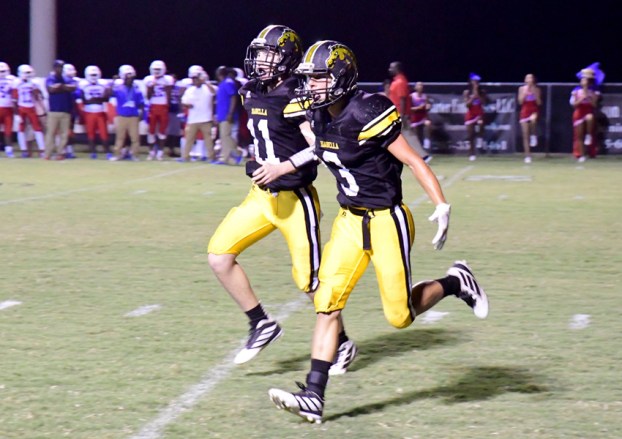 Isabella and Maplesville will be playing a football game against each other for the 79th time on Oct. 11. (Photo by Anthony Richards)

This is the week we have all been waiting for, as undefeated Isabella makes the short trip up the road to square off against county rival and one-loss Maplesville.

However, Maplesville’s loss came a couple of weeks ago to Reeltown, which was a non-region game, so both teams enter Friday’s contest battling for the de facto region championship.

Despite both teams having one region game remaining on the schedule, the winner of the game would secure the title if accompanied by a Francis Marion loss to Linden.

The tilt will garner plenty of attention from across the state with each team ranked in the top-10 in Class 1A. According to the Alabama Sports Writers Association, Maplesville is ranked No. 4, while Isabella sits at No. 10.

There are three storylines to follow heading into Friday night’s showdown:

Cole Atchison and Jackson Abbott are among the top four quarterbacks in the county when it comes to throwing the ball.

However, Atchison is also among the county’s best when it comes to production on the ground, including carrying the ball 34 times for 251 yards and two touchdowns in the victory over Linden.

The added threat that Atchison’s legs present could be the difference in the game.

With that said, Abbott will be tasked with the challenge of keeping pace in a game that has the potential to be fairly high scoring.

Both of Maplesville’s touchdown drives against Linden were essential passing clinics put on by Abbott.

The Red Devils will need him to be on target the entire game, especially against a secondary that has shown a knack for turning errant throws into interceptions. 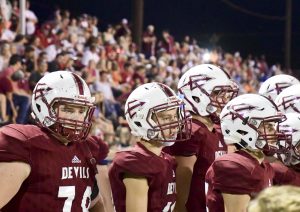 Maplesville will be hosting this year’s meeting. (Photo by Anthony Richards)

Turnovers have been a deciding factor in this game in recent years and could come back to haunt one of the teams again.

The best way to avoid the negative side effects of a turnover is to hold onto the ball, something sure to be preached this week in practice by both coaching staffs.

Both defenses have had success getting opposing offenses out of their rhythm whether with backfield penetration or stride-for-stride coverage on in the backend.

Regardless of whether it’s the secondary or the front seven, there are skilled players everywhere you look.

Isabella’s Kendall Reeves leads the county with six interceptions on the year, the definition of a ball hawk, while Maplesville’s Taylor Sheffield is tied for the county lead with 58 tackles.

Reid Mitchell of Isabella tops the county with nine sacks, while three other Mustangs have taken the opposing quarterback down on at least three or more occasions.

Return off the running backs

Both teams are expected to get back valuable contributors in the backfield in the form of Ryan Morrow for Maplesville and Lance Price for Isabella.

They have each been held out recently while dealing with injuries and will be a big boost to the either offense if they are able to return to action.

Although there are other capable options that can tote the ball, both coaching staffs would rather go into a crucial game with as many playmakers at their disposal as possible.

Nick Simmons put forth an insane performance on the ground with 180 yards and three touchdowns on 15 carries to... read more