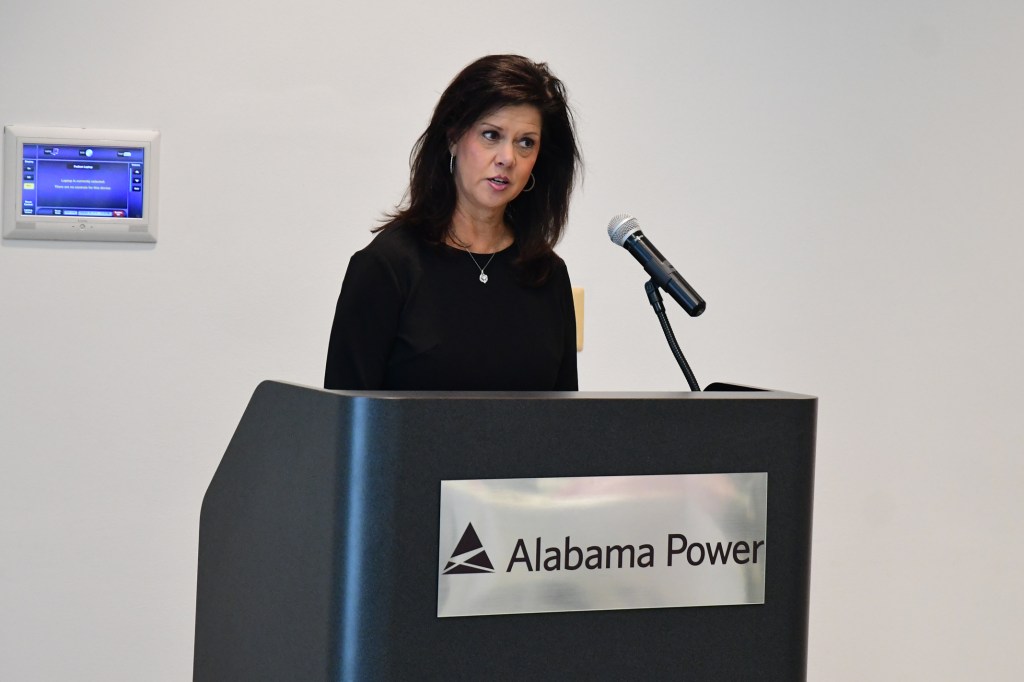 Leslie Sanders, the Alabama Power Southern Division vice president, was the guest speaker at the October luncheon hosted by the Chilton County Chamber of Commerce.

The Chamber held the event at the Alabama Power conference center Oct. 8.

Sanders spoke about economic development and the impact a Chamber can have on local business.

“It has been many years since I have gotten to spend time with this group, and a lot has changed,” Sanders said of the Chilton Chamber. “All of you are here because you know a healthy and active Chamber is critical to both business retention and recruitment.”

Sanders said Alabama Power and Chilton County have enjoyed a “long history” together, mentioning the construction of Lay and Mitchell dams.

“We were able to bring electricity to thousands of Alabamians,” Sanders said. “This area is very near and dear to our company and our history. We have so many employees that live here in the county.”

Sanders said that economic development is successful when there is a collaborative effort among the different groups in an area. She said organizations like the local Chamber and city governments have to work together in order for the area to grow.

Sanders also mentioned not becoming complacent once one goal is achieved, because that can cause stagnation in development and growth.

“Chilton County is known for peaches,” she said. “You have cornered the market on that. You have a great symbol in the peach water tower. But what else does Chilton County have?”

She said one of the keys to growth in the county will be adding something else the area is known for, be it the upcoming Alfa Farm Center or some other facet of local industry.

Clanton Mayor Billy Joe Driver signed a proclamation towards the end of the event recognizing next week, Oct. 14-18 as Chamber of Commerce Week.

This is part of a statewide event that seeks to highlight local Chambers and their efforts to bring business to their respective counties.