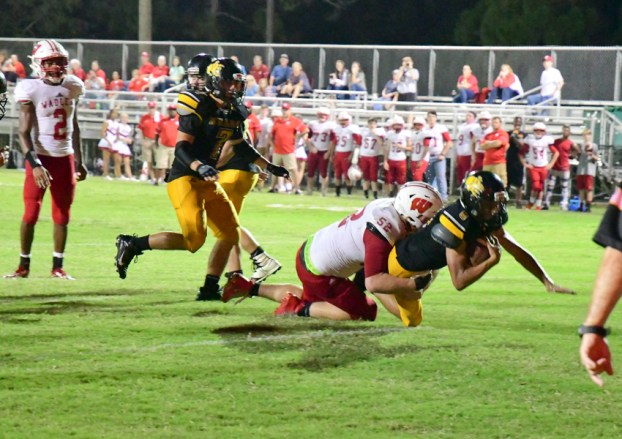 Brisen Tatum stretches over the goal line to put an exclamation point on Billingsley’s 25-6 win over Wadley on Oct. 4. (Photo by Anthony Richards)

What was even more impressive than the win itself was the way in which Billingsley controlled the game.

The Bears led 12-0 heading into the fourth quarter, and the defense came up with a big stop to force a turnover on downs and put a halt to a promising Wadley drive.

Senior Brisen Tatum started at quarterback in place of the injured Levi Arington and did an excellent job of filling the void along with fellow senior running back Taylor Arington.

“The first thing I had to do was to be in the right mindset [to play quarterback],” Tatum said. “I was nervous until I took the first snap, and after that I was good. It felt normal after that.”

Following another turnover on downs, with Kylan Thomas providing pressure on the opposing quarterback, Taylor Arington broke loose into the secondary for a 62-yard touchdown run and a one-play scoring drive.

However, the defense once again set up the offense after an interception by Tatum that he returned to the Wadley 19-yard line.

Tatum finished what he started with an eventual short touchdown run to increase the lead to 25 points with 4:15 left to play.

“We told our guys that the most physical team was going to win and that was the case,” Coggins said. “They showed up to practice Monday and never doubted what we were doing.”

Tatum put an exclamation point on the contest with his final score, despite Wadley scoring late to avoid a shutout and make the score a little more respectable from their standpoint.

“We had some adversity when we lost our quarterback on the second series last week,” Coggins said. “We made some changes and Brisen stepped up. When things get tough, tough guys find a way to make a play.”

Tatum finished with 117 yards and three touchdowns on 16 carries, while Taylor Arington ran for 116 yards and a touchdown on 14 totes.

Taylor Arington also led the team with 14 tackles and a fumble recovery from his linebacker position.

With the win, Billingsley is tied with Lanett for first place in Region 4-1A with a record of 3-0 and 4-2 overall.

The Bears will face Autaugaville on the road on Oct. 11.

“Tonight’s game makes every game after this even bigger,” Coggins said. “We want those big games, that’s why we’re here.”

It was easy pickings for Maplesville, who celebrated homecoming night with a 48-0 victory over Ellwood Christian on Oct. 4.... read more