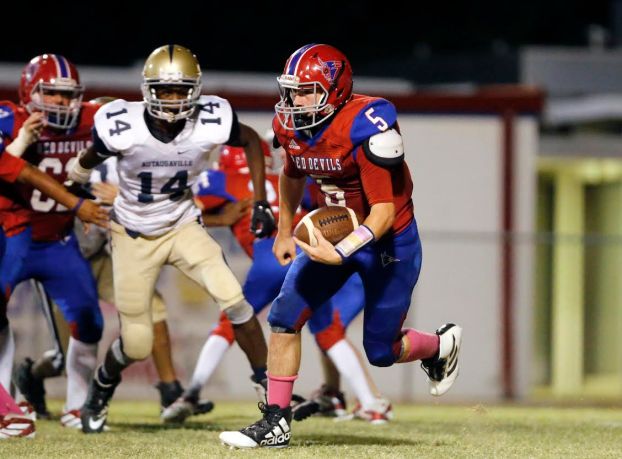 Homecoming 2019 turned bittersweet for the Verbena Red Devils on Oct. 4 as the weeklong festivities came to an end with a 50-0 loss to the Autaugaville Eagles.

A pair of stops by each team’s defense to start the game would give way to the Eagles scoring early and often, as Autaugaville would put the first points of the game on the board with their second possession as Cincere Johson would find pay dirt from 9 yards out to give the Eagles an early 8-0 lead.

Another round of scoreless possessions would see Autaugaville put their second score of the night on the board thanks to a 10-yard scamper from DeWaun Stubbs that would make it 16-0 Eagles early in the second quarter.

Autaugaville would tack on three more during the second quarter as Jermaine Sanders would go in from 12-yards out as well as another from the 2-yard line. With the addition of a scoop and score by Mardriquez Lee, the Eagles would take a 36-0 lead to the half time break.

The trend would continue in to the second half as the Red Devils opening drive would be cut short on an interception that would set Autaugaville up near midfield where another Eagles touchdown drive would ensue. Three plays later and a 43-yard strike from Stubbs to Johnson would make it a 44-0 Autaugaville lead.

With a running clock and time ticking away, the Eagles would tack on one more with just 1:59 remaining as Marcus Golson would go in from 1 yard out to bring the game to its final score of 50-0.

Nathanial Morris led the Verbena ground game with 8 yards on 7 carries while Stubbs lead the Eagles passing attack with 167 yards on 5 of 8 passing with one touchdown.

Verbena was overmatched against Highland Home and lost 60-0 in a home contest on Sept. 27. It was tough sledding... read more