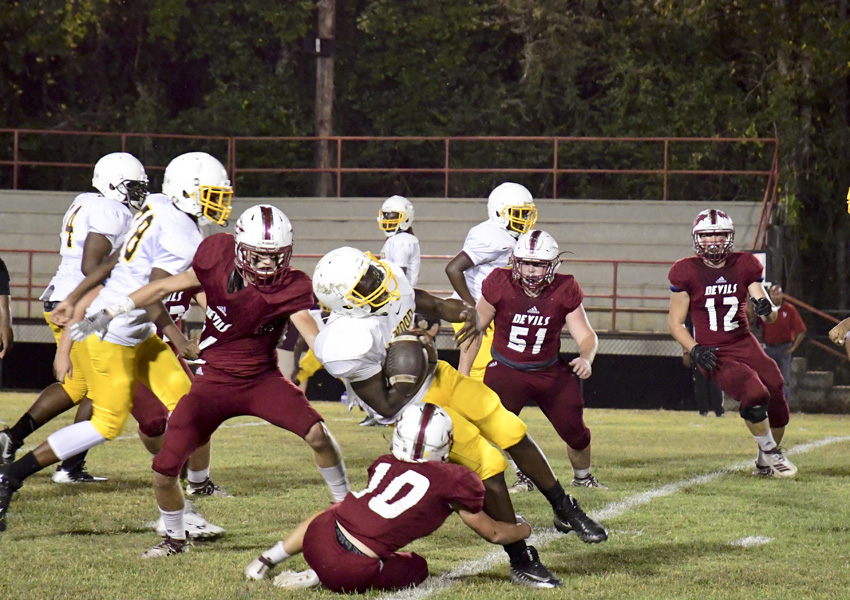 Ellwood Christian was held to 49 offensive yards and their three first downs matched their number of turnovers. (Photo by Anthony Richards)

It was easy pickings for Maplesville, who celebrated homecoming night with a 48-0 victory over Ellwood Christian on Oct. 4.

The Red Devils defense did their best impersonation of the 1985 Chicago Bears en route to shutting out the Eagles on the night.

Ellwood Christian was held to 49 offensive yards and their three first downs matched their number of turnovers.

One of those turnovers was an interception returned for a score by Brandon Pickle.

Eight different Maplesville players recorded a tackle for a loss in the game. The group was led by Jacob Johnson who finished with two on the night.

Jackson Abbott was precise through the air all night and finished by completing six of his nine pass attempts for 105 yards and two touchdowns. 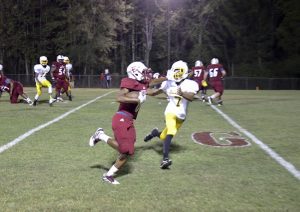 Latrell Wislon tells an Ellwood Christian defender to “talk to the hand” with a fierce stiff arm. (Photo by Anthony Richards)

Kayln Hardy and Ajala Robinson were on the receiving end of Abbott’s touchdown tosses. Hardy hauled in a team-high 52 yards.

Abbott also ran for a 31-yard score to open up the game’s scoring.

Ryan Morrow did not play in the game for precautionary reasons as he recovers from an ankle injury suffered a week ago against Reeltown.

The absence of Morrow meant a committee of players sharing the rushing duties.

However, the Red Devils still had no trouble running the ball with Brady Harrison, Latrell Wilson, Jackson Abbott and Jordan Lee each finding pay dirt on the ground.

Up next for the Red Devils is a mega showdown at home against Isabella on Oct. 11. It will be for the region championship.