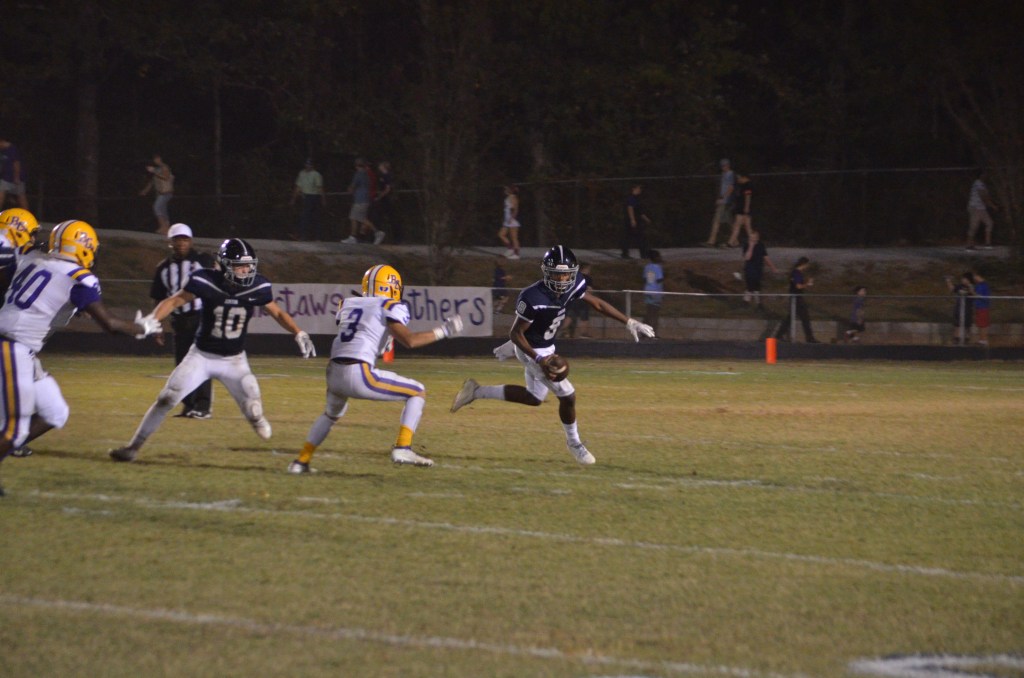 Quarterback James Wright scrambles out of the pocket. (J.R. TIDWELL/ADVERTISER)

While the outcome was not what the Panthers hoped for, a 54-0 shutout loss, some players walked the sidelines telling their teammates to keep their heads and even yelling at the crowd to make some noise and get back in the game.

It was 28-0 Choctaws by the end of the opening quarter. Bibb County ended another drive with a short touchdown run with 7:08 remaining before halftime to extend its lead to 35-0.

The Jemison offense struggled to get going behind backup quarterback James Wright and running back Noah Gilliland.

The Panthers did show some sparks with the ball at times, but they did not manage to put together a sustained drive and find the end zone.

The Choctaws made it 42-0 just before halftime.

Jemison saw its first possession of the second half end on a 35-yard pick six.

This time BCHS missed the point after, leaving the score at 48-0.

The Panthers got going on offense and crossed midfield into Choctaw territory with their next possession, but it to was ended prematurely by a fumble. Bibb County recovered at its own 40-yard line.

The scoreline remained until early in the fourth quarter when the Choctaws capped a drive with a 9-yard touchdown run to set what would be the final score at 54-0.

The Choctaws looked as if they would put one more touchdown on the board late, but Jemison recovered a fumble to end the drive before running out the clock with a final few plays.

The Panthers play at Marbury Oct. 11.