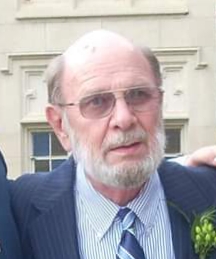 Joe Wheeler O’Neal, Jr. of Notasulga, Alabama, and formerly of Maplesville and Montgomery, Alabama, passed away on Saturday, September 28, 2019.

He graduated from Sidney Lanier High School in 1953 and from Auburn University in 1958 where he was a member of Sigma Alpha Epsilon.

He retired from Delta Airlines in 1997 but also worked in the flower business throughout his life and eventually retired from Montgomery Wholesale Floral Company in 2014.

He was preceded in death by his wife, Nelda Putnam O’Neal, his parents, Joe Wheeler O’Neal, Sr. and Myrtice Nichols O’Neal, his sister and brother-in-law, Ann O’Neal Ott and Len Ott, and his nephew, Michael Ott.

A memorial service is scheduled for 1 p.m. on Monday, October 21, 2019, at Maplesville Baptist Church, 9391 AL Highway 22, Maplesville, AL 36750. Memorial contributions may be made to one’s charity of choice.