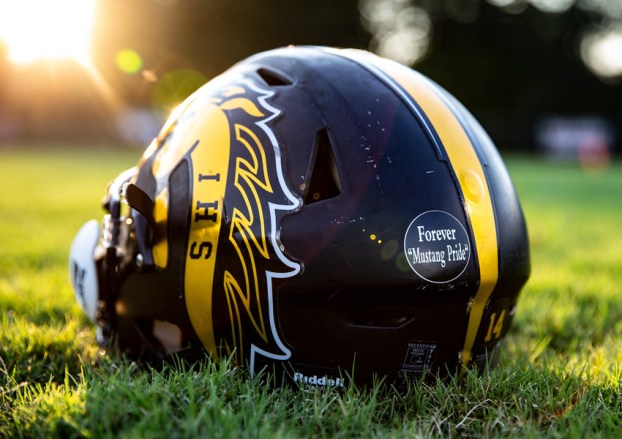 The Isabella football team had special decals placed on their helmets in remembrance of Craig Hunnicutt. They will continue to wear them the rest of the season. (Photo by Brandon Sumrall/Special)

The Isabella community and football program is going through an emotional time following the death of former head football coach Craig Hunnicutt after battling ALS for 22 years and dealing with a recent bout of cancer.

Hunnicutt passed away on Sept. 26, one day before Isabella defeated Thorsby 33-0 for a big road win.

Hunnicutt coached the football team at IHS from 1996 to 2000. During that time one of his players was current football coach Tate Leonard.

Hunnicutt was diagnosed with Lou Gehrig’s disease during his first year as head coach in 1996. The disease is known to attack the nervous system and leads to progressive muscle weakness.

“He told us toward the end of my ninth grade year,” Leonard said. “You could slowly see him go down every year.”

According to Leonard, one of the things he remembers about Hunnicutt was the strength and commitment he showed on a daily basis, to the point where if not for his physical struggles it would be hard to tell he was fighting a disease from his attitude.

“He didn’t let his illness define him, he let his relationship with Christ define him,” Leonard said. “He was a very good Christian role model. You knew that he loved you and cared for you as a coach, there was no doubt.”

The Isabella football team had special decals placed on their helmets in remembrance of Hunnicutt. They will continue to wear them the rest of the season.

Although many of the players on the current roster never met Hunnicutt personally, they know of him from the stories that Leonard has shared with them.

“I’ve talked about him over the years and our field house is named after him, which I always explain the importance of that,” Leonard said. “They [players] knew I was upset, so they supported me through it.”

Leonard credits Hunnicutt as the reason he got into coaching.

“After my senior year I was in that mode where I didn’t know what I was going to do,” Leonard said. “I was at their spring football game and I remember that he actually got run over on the sidelines because he wasn’t very mobile at that time. I was one of the guys there to help him up, and he asked me if I wanted to help him coach that year. I will never be the coach he was, but I try to model my coaching after some of the things that he taught us.”

One of Hunnicutt’s lasting legacies is the creation of the phrase “mustang pride,” which still echoes through the halls and athletic facilities at the school to this day.

The phrase has gained such reverence since Hunnicutt first uttered it several years ago that “I will have mustang pride” is the last line recited as part of the school’s creed.

“Everyday I go in the field house I’m reminded of him,” Leonard said. “The last few days have been very tough.”

The Billingsley Bears took two steps up in class and won in convincing fashion with a 49-8 victory on the... read more