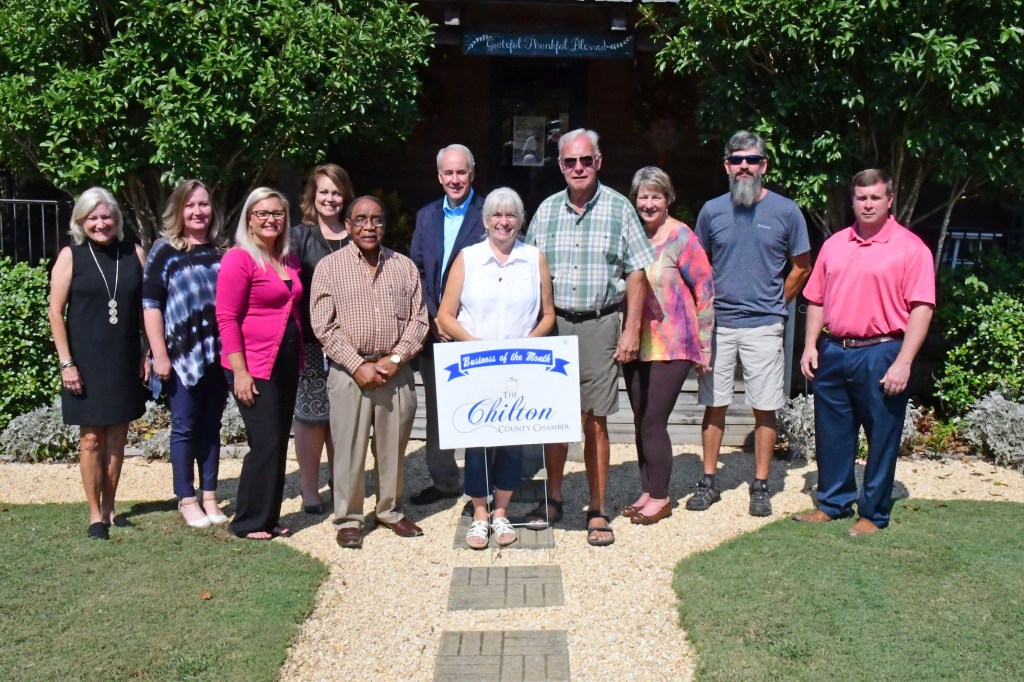 Representatives from the Chilton County Chamber of Commerce were on hand to congratulate the owners of Hidden Meadow Vineyard in Jemison for being named the Chamber’s business of the month for October. (J.R. TIDWELL/ADVERTISER)

Members of the Chilton County Chamber of Commerce gathered at Hidden Meadow Vineyard in Jemison Oct. 1 to congratulate the Bailey family after hearing through the grapevine that the business had been selected as the Chamber’s business of the month for October.

Bill and Janette Bailey own the business while other family members, such as son Jeff, help run it.

“From the top down me, Mom and Dad take care of a lot,” Jeff Bailey said. “We do hire help from time to time, for harvests and pruning, pretty much. Some of the kids do some stuff.”

“Just about everything was planted up until we opened in June 2011,” Jeff said. “We had more plantings after that up until three years ago. We have a lot. It’s a lot to harvest. Last year was our best harvest to date, which was about 14 and a half tons. This year, due to weather or the vines themselves wanting to take a break, we only had about a third of that. We will be fine, because we have a little bit left over from last year. It’s Mother Nature. It is what it is. You have to take the good with the bad.”

Hidden Meadow grows mostly muscadines, a variety of grape that Jeff says is “king of the South.”

“It is easy to grow, and we don’t have to spray them with anything,” he said. “The critters do like them, deer and raccoons, but they don’t make a dent (in the crop) really.”

The Baileys grow other varieties of grape as well that are turned into multiple wines along with the muscadines.

Hidden Meadow Vineyard also offers other related items, including corkscrews, jams and jellies made from the locally-produced wine and tumblers.

“We have weddings,” Jeff said. “This weekend we have a class reunion. We have birthday and anniversary parties. We have pretty much had it all.”

Jeff said it is “awesome” for Hidden Meadow to receive the business of the month honor.

“I can’t wait to put that sign out by the road,” he said. “That is going to draw quite a few people. Exposure is everything, getting our name out there. It will be an advertisement for sure.”

Anyone looking for more information on Hidden Meadow Vineyard may look them up on Facebook, Instagram or visit hiddenmeadowvineyard.com.

Due to Alabama law Hidden Meadow is not allowed to ship wine inside of the state, “but we have about 60 locations we distribute to,” Jeff said. “They are all listed on our website. Other than that they can come to the vineyard. That is the best way to experience it, because you can taste everything.”

Hidden Meadow Vineyard is open Fridays and Saturdays from 10 a.m. to 6 p.m. and tastings are complimentary.