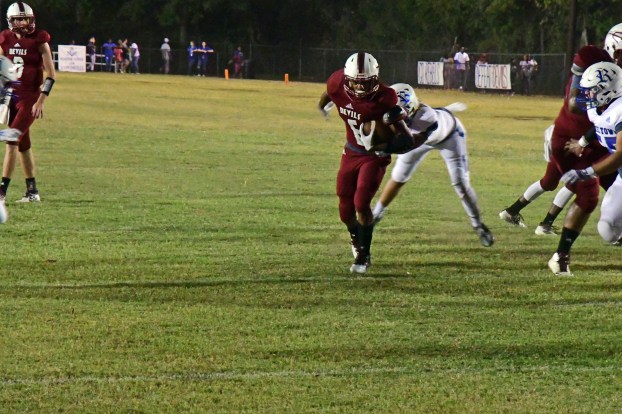 Latrell Wilson fights to get into the end zone for Maplesville’s first score of the night. (J.R. TIDWELL/ADVERTISER)

Turnovers proved to be the downfall for Maplesville in the Red Devils’ 33-21 loss to Class 2A opponent Reeltown Sept. 27.

MHS ended up suffering three fumbles in the contest, one of which was returned 70 yards for a Rebels touchdown.

Contrary to the game’s final outcome, it was Maplesville that got on the board first on a promising opening drive.

Latrell Wilson capped it off with a 7-yard touchdown run that put the Red Devils up 7-0 early in the first quarter.

Reeltown wasted no time in answering, however, as the Rebels broke a 49-yard touchdown run just over a minute later to even up the score.

The contest seemed destined to be a shootout at that point, but both defenses tightened up for the rest of the quarter.

The Rebels forced a turnover on downs near midfield on the Red Devils’ next possession, and Reeltown went ahead 13-7 on an 11-yard touchdown pass just one play into the second period.

Later in the quarter Maplesville made a drive into Reeltown territory. A MHS ball carrier had his momentum stopped on a run, but before the referees blew the play dead a Rebel defender made the aforementioned strip and score to put RHS up 21-7.

The Red Devils had another drive end at the Rebels’ 20-yard line on a fumble just before halftime.

Reeltown extended its lead to 27-7 on a 34-yard touchdown run midway through the third quarter, and a goal line plunge two minutes later proved to be Reeltown’s final score of the night for the Rebels.

The Red Devils lost a third fumble before getting back on the scoreboard midway through the closing period.

Quarterback Jackson Abbott capped off a drive with a goal line run to make it 33-13 after a conversion pass failed.

The Red Devils ended up with the ball one last time in the closing minutes.

Abbot connected with Kalyn Hardy on a 48-yard touchdown bomb with 26.3 seconds remaining in the contest to set the final score.

Maplesville falls to 4-1 on the season but remains 3-0 in region play. The Red Devils will look to bounce back when they host 0-5 Ellwood Christian next week in a return to region play.

By J.R. TIDWELL / Editor The unemployment rate for Chilton County during the month of August dropped down to just... read more