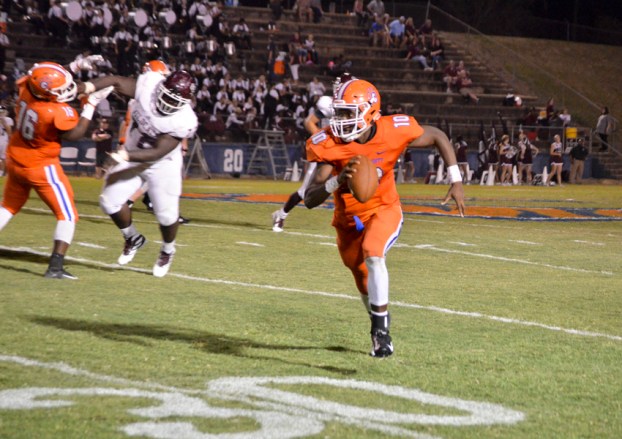 Shi Keem Laister gets outside the pocket against Benjamin Russell on Sept. 27. (Photo by Anthony Richards)

It was a long night for the Chilton County Tigers, as they proved to have no answer for the Benjamin Russell rushing attack en route to a 55-7 loss at home on Sept. 27.

As a result, the Wildcats opened up a 35-7 halftime lead and CCHS needed some major adjustments to work if a comeback was in the cards.

The start of the second half leaned in CCHS’ favor after the Tigers pounced on a fumble on the kickoff to open the third quarter.

The turnover gave the Tigers’ offense the ball to start the second half at the Benjamin Russell 26-yard line.

However, CCHS could not capitalize on the change in fortune and ended up turning the ball over on downs.

Unlike CCHS, Benjamin Russell was able to take the ball right down the field and put and punch it in the end zone to extend its lead 41-7 early in the third quarter. 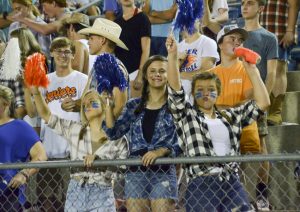 The CCHS student section was not going to let getting blown out get them down. (Photo by Anthony Richards)

The Tigers once again showed positive signs on offense with another drive deep into Wildcat territory but still had no points to show for it.

The drive was moving right along when CCHS starting quarterback Shi Keem Laister ran to convert a fourth-and-2.

However, he had to leave the game due to his helmet coming off and the ensuing snap sailed over the head of backup quarterback Dalton Patterson and the Benjamin Russell defense chased down the loose ball.

Laister threw an interception backed up in his own in that was returned for a touchdown to give the Wildcats a 49-7 lead at the end of the third quarter.

The only CCHS touchdown in the game was scored on the ground by Laister.

One of the few bright sides for the Tigers is that the game had no region ramifications. Both teams have a record of 3-3 overall following the result.

For the third consecutive week a county rivalry takes center stage as the game of the week. This time around... read more