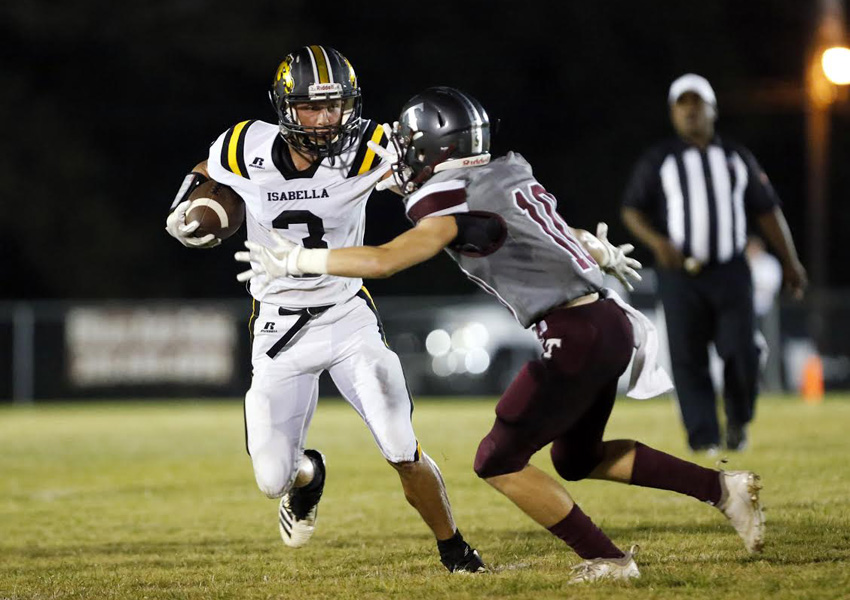 A cross county rivalry turned all black and yellow as the Isabella Mustangs pitched a shutout on the road in a big win over the Thorsby Rebels, 33-0, on Sept. 27.

Isabella wasted little time in flexing its offensive muscle as the Mustangs would start the game with possession at their own 40-yard line and would commence a eight play scoring drive that would be capped off with a 9-yard touchdown run by Cole Atchison that would put Isabella up 7-0.

The Rebels first possession would go more backwards than forward, however a Thorsby punt would be muffed by Isabella and recovered by Thorsby at the Isabella 44. A big pass play from Brody Barnett to A.J. Smith would move the Rebels down inside the red zone where the drive would stall with a fourth and six and the 10-yard line.

The poor field position would not slow down the Isabella offense as the Mustang ground game would go to work picking up six, seven, and eight yards a pop as a 75-yard scoring drive would end with a 8-yard touchdown run by Nickolas Simmons that would make it a 13-0 Isabella lead late in the second quarter.

A quick three and out by Thorsby would see Isabella set up first and 10 at their own 20 where yet another scoring drive by the Mustangs during the half would end with a Atchison to Simmons 35-yard touchdown reception that would give Isabella a 20-0 lead at the half. 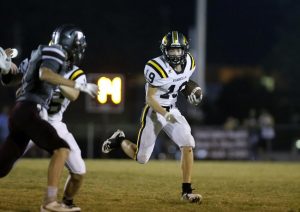 The second half of the contest would see both teams come out with quick possessions that would end with punts, but that would do little to slow down the Mustang offense as Isabella would again get the run game going starting at their own 18.

A big first down run by Braxden Giles would move Isabella out near their own 30 but it would be a fourth and one at the Thorsby 23-yard line that see Atchison find pay dirt once again while putting Isabella out in front 26-0.

With the Isabella defense pitching a shutout and the Mustangs digging deep in to their bench, one final touchdown would come the way of Isabella as Zachary Chapman would break lose with 3:52 to play and would scamper down the right side for a 59-yard touchdown that would put the feather in the hat of the Mustangs on a big 33-0 win over Thorsby.

Atchison and Giles each broke the 100-yard mark as Atchison picked up 105 yards and two touchdowns on 16 carries while Giles added 103 yards on 10 carries. Atchison also added 110 yards through the air on 8 of 14 passing.

For Isabella, the added experience has been a key to this years success.

“We are an older team, we weren’t bad at all last year, we just made a lot of mistakes,” said head coach Tate Leonard. “We are a year older, everyone is believing and executing. Our defense has been pretty good the past two years, last year our offense didn’t help us out much. Our defense is pretty impressive. That is a very good Thorsby football team and we did what it took to get the job done.”