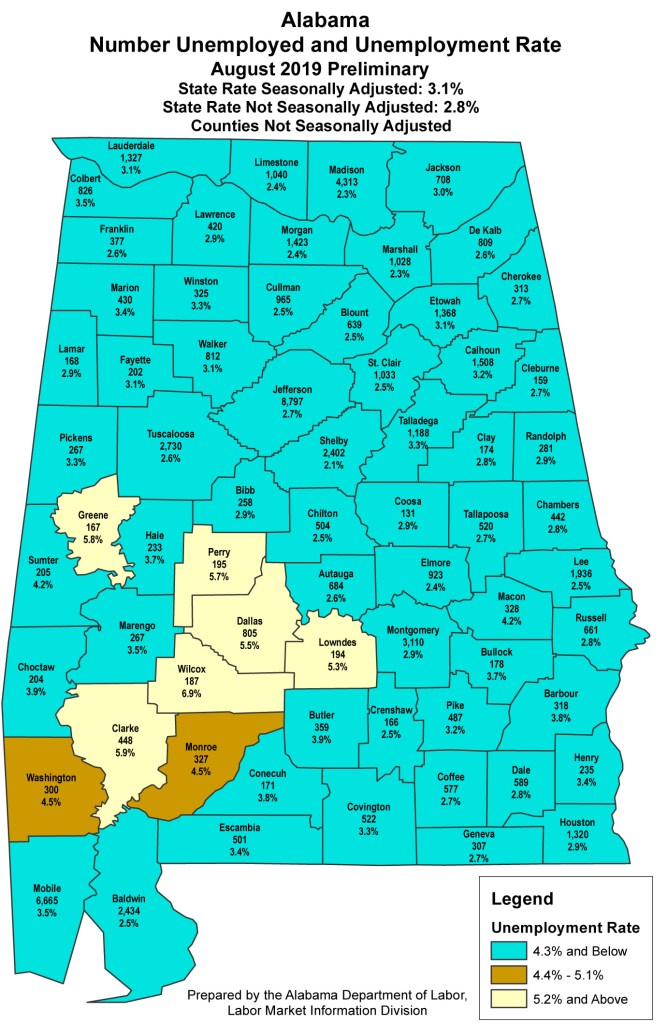 This map shows the unemployment rate for each county in Alabama for the month of August. (DEPARTMENT OF LABOR)

The unemployment rate for Chilton County during the month of August dropped down to just 2.5%, according to numbers released by the Alabama Department of Labor.

The state set records for lowest unemployment rate at 3.1% and most people employed at 2,184,511.

“Not only can we be proud of the fact that Alabama is breaking record after record; but we can also be proud that more of our good men and women are gaining employment,” said Governor Kay Ivey.  “Alabama has made significant progress regarding our economy.  Not only are we putting people to work, but their earnings are increasing, and our industries are growing.  Even with all this headway, we realize we must continue exhausting our efforts to make sure that all Alabamians who want a job have a job, and we won’t stop until we achieve that goal.”

Neighboring Shelby County once again posted the lowest unemployment rate at 2.1%, while Wilcox County remained that highest, though just at 6.9%

“Along with this brand-new record low unemployment rate, Alabama continues to break other records as well,” said Alabama Department of Labor Secretary Fitzgerald Washington. “More people are working in Alabama than ever before, a record we’ve broken every single month this year. More than 68,000 Alabamians are working today that weren’t last year, and that’s great news. Fewer people are unemployed in Alabama than ever before, and our workforce is larger than it’s ever been, with consecutive growth for the past eight months.”

The unemployment rate for the United States in August was 3.7%