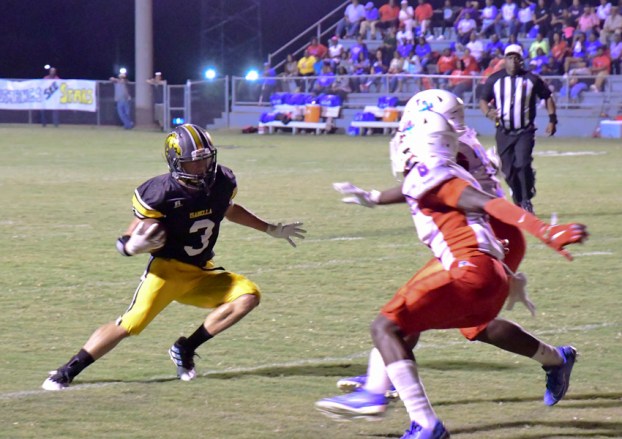 Braxden Giles of Isabella cuts back against a pair of Linden defenders on Sept. 20. The Mustangs turn their attention to Thorsby this week. (Photo by Anthony Richards)

For the third consecutive week a county rivalry takes center stage as the game of the week.

This time around Thorsby prepares to host Isabella in the 54th football meeting between the schools.

Isabella defeated Linden for the first time in program history and in the process staked its claim as a team to be reckoned with for the Region 3-1A championship.

It was obvious on the faces of players and coaches how much the win meant on the field and in the locker room following the game.

Thorsby bounced back from a loss by winning a tight affair against Vincent on the road.

With the win, the Rebels currently have a region record of 2-1 and sit in a tie for second place with LaFayette in Region 4-2A.

Quarterback play will have an important impact on the game as it usually does.

Cole Atchison is coming off a game where he carried the ball 34 times for 200-plus yards. 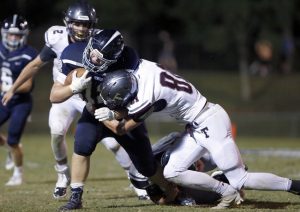 The Thorsby defense will face a tough challenge against an explosive Isabella offense. (Photo by Brandon Sumrall/Special)

Although he is not expected to reach that number of carries again this week, it is safe to say that he will be a valuable part of the Mustangs attack.

Lance Price left Friday’s game with an apparent shoulder injury. Getting him healthy is key, because he provides Isabella with a power running game.

Kendall Reeves and Braxden Giles continue to present mismatch problems out wide with their speed.

It will be up to the Thorsby defensive backs to limit the knockout shots down the field that the Mustangs have shown the ability hit on a consistent basis this season.

With each game that passes for Thorsby, Brody Barnett seems to be making incremental gains, especially when it comes to the passing game.

Jacob Lockhart has begun to hit his stride the past couple of weeks after returning from an early season injury, to the delight of the Thorsby coaching staff.

However, points will be a difficult task for the Rebels.

Isabella’s defense has a pair of shutouts on the season and has yet to surrender 20 points in a game through four weeks.

With the pace Isabella has scored points this season; it is difficult to see a scenario where Thorsby takes home the victory without reaching the 20-point mark.

Thorsby edges out Vincent for region win The Thorsby Rebels finished strong and earned a narrow 28-20 victory on the... read more