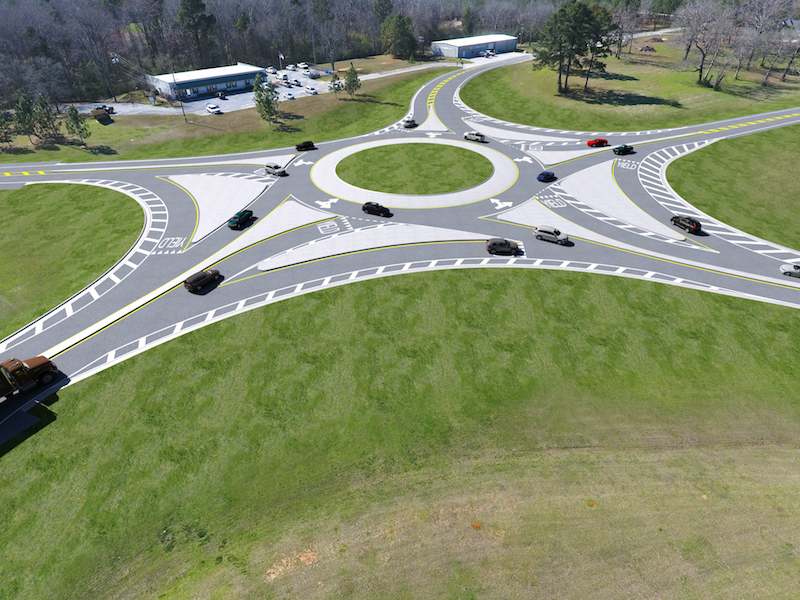 This conceptual drawing shows the plan for a roundabout for Bibb County, similar to plans for Chilton County near Interstate 65, Exit 208. (Photo courtesy of ALDOT website)

Two of Clanton’s exits off of Interstate 65 have been approved for improvements through the Heart of Alabama Rural Planning Organization.

Plans for Exit 208 include the addition of roundabouts with required signage at the intersection of the interstate on and off ramps with County Road 28.

The project is estimated to cost $2.565 million and will be funded through state and federal funds.

According to the state transportation improvement plan, construction on the project is set to begin in 2021.

Roundabouts will be used more often in the future when a county road intersects near interstate ramps.

“We have found that it is a lot more effective to put roundabouts (rather than traffic lights),” David Kemp of the Alabama Department of Transportation said.

A roundabout keeps traffic going by having drivers merge into a circle and drive around a small loop until they reach the street they need.

“Basically, you enter one from any direction, you go to the right,” Kemp said. “Then when you need to get off, there will be a little area for you to get off … Everybody can keep moving.”

It also eliminates waiting for a light to change when a driver is the only one at an intersection.

“They are not for everywhere, but we think they will work a lot better at the tops or where the ramps come off the interstate,” Kemp said.

Kemp said alternatives to the traditional traffic lights are going to become more prevalent in the state to deal with traffic issues.

ALDOT is discussing possible ways to educate drivers, particularly new drivers and senior citizens, on new alternative intersections and how to navigate them. Kemp said roundabouts have been used in other areas and in Europe for several years.

Widening the bridge at Exit 205 is expected to begin in 2020. The project is expected to cost $4.017 million and will be paid for with state and federal funding.

Patching and traffic striping on County Road 51 from County Road 44 to County Road 42 has been approved for 2020. The project is expected to cost $426,000, most of which will come from federal funding.

Although not approved in the funding plan this year, ALDOT has begun to look at potential improvements that may be needed near Exit 212 and Lay Dam Road related to the proposed Alabama Farm Center.

“We are just starting to look at the interchange,” Kemp said. “We know that we are going to have to do something. Luckily, they have brought us in at the beginning of all this.”

ALDOT knows road infrastructure at near the site will be a time sensitive issue.

Funding created by the Rebuild Alabama Act may be able to be applied for to complete the needed road improvements. Kemp said a portion of the funds are to be specifically used for economic development.

The Heart of Alabama Rural Planning Organization meets on a quarterly basis and applies to ALDOT for funding for necessary projects in Blount, Chilton, St. Clair and Walker counties.