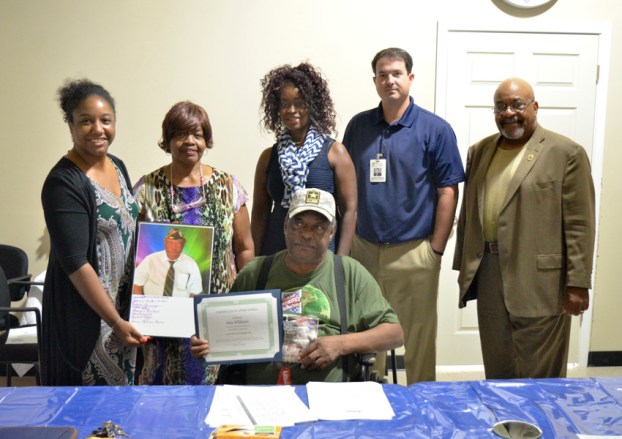 Ocie Williams was honored for his 20 years of service as a board member with Community Action of Middle Alabama on Sept. 19. (Photo by Anthony Richards)

The Community Action Partnership of Middle Alabama recognized Ocie Williams for his years of service with the nonprofit organization with a surprise party on Sept. 19.

Williams was given an award, certificate of appreciation and a framed picture signed by all of the board members as part of the ceremony.

A commonly used word when describing Williams is “dedication,” which he has lived up to through his 20 years of service as a member of organization’s board.

Prior to giving back to the county he was born and raised in, Williams gave back to his country by serving 24 years in the U.S. Army after joining in 1962.

It seemed liked a natural transition following his retirement from the military to continue helping others just in a different capacity.

Several of Williams’s friends and military acquaintances were on hand for the party. 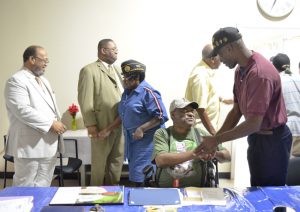 Several of Ocie Williams’s friends and military acquaintances attended a surprise party to honor him at the Community Action of Middle Alabama headquarters in Clanton on Sept. 19. (Photo by Anthony Richards)

“It means so much to me to have all my friends here,” Williams said.

Williams was initially appointed to the board by then Probate Judge Bobby Martin.

The majority of Williams’ time on the board has been spent as secretary.

“I enjoy helping people,” Williams said. “No matter what, I love this county.”

According to Williams, it is a quote that hits home for him, especially as he gets older.

The organization strives to help people with a range of financial and medical needs. Some examples of assistance can include with electrical bills and home improvements.