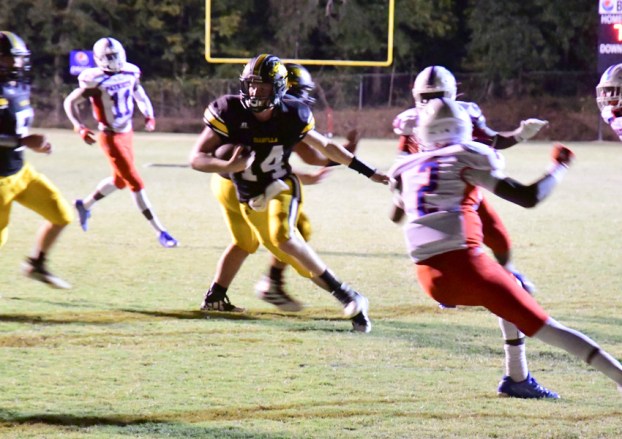 Cole Atchison led Isabella with 34 carries for 251 yards against Linden on Sept. 20. (Photo by Anthony Richards)

Sound the sirens because Isabella is a legitimate contender in Class 1A, if there was even any doubt, following a dominant 34-18 victory over traditional power Linden.

Isabella controlled the line of scrimmage on both sides the ball with the defensive front providing relentless pressure and the offensive line opening up gaping holes.

Cole Atchison and Lance Price each put forth workhorse performances on the night to lead the offensive effort.

Atchison carried the ball 34 times for 251 yards and two scores, while Lance Price had 12 totes for 81 yards and three touchdowns.

Atchison’s 34 carries came a week after not running the ball at all against A.L. Johnson.

According to Atchison, designed quarterback runs was one of the focal points of the game plan against Linden going in.

All night long the Mustangs ball carriers ran behind great push from the Isabella offensive line.

On the final touchdown of the game, Atchison ran through a hole wide enough to drive a car through on his way to the end zone. 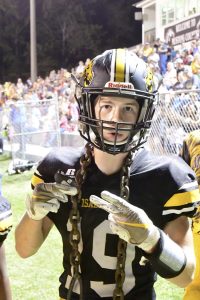 “They were loading the box and we were working on it all week,” Isabella senior center Brandon Evans said.

According to Evans, he could feel himself and his fellow linemen getting stronger and having there way more and more with the Linden front seven as the game went along.

On defense, the Isabella front seven practically lived in the opposing backfield and made life difficult for Linden’s quarterbacks.

Dalton Mims, Anthony Fjeldstad and Kaleb Brasher were just some of the disrupters up front.

Due to the pressure, Isabella was able to create turnovers on the back end.

Kendall Reeves intercepted a pair of passes on the night. Both picks came in the fourth quarter and helped the Mustangs put the game on ice.

The Mustangs led 13-12 at halftime, but outscored Linden 21-0 in the second half.

According to Isabella head coach Tate Leonard, the win was a result of a complete team effort.

It was a statement win for the Isabella program, and most importantly improved the team’s record to 4-0 overall and 3-0 in Region 3-1A.

The outcome sets the stage for a monumental game against Maplesville on Oct. 11 that will decide the region championship if both teams can take care of business in the next couple of weeks leading up to the showdown.

BRANDON SUMRALL Special to the Advertiser   For 70 years (1950 being the first year the two teams met), the... read more