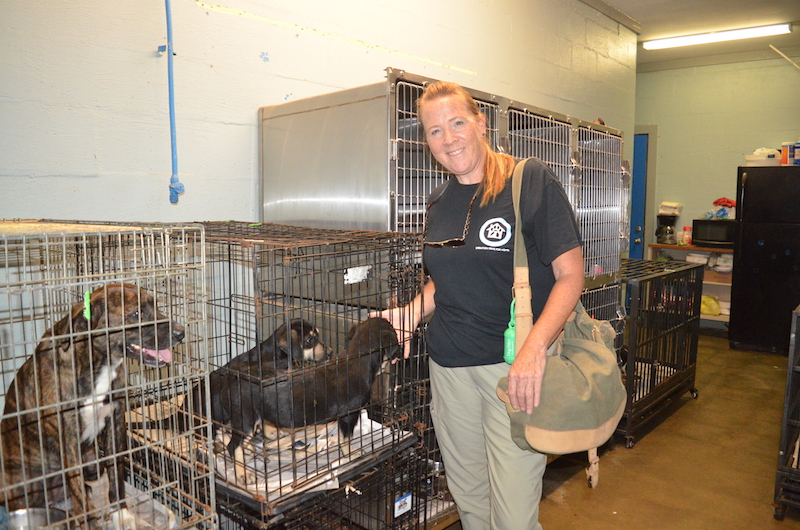 An author from Pennsylvania stopped by the Humane Society of Chilton County on Sept. 19 while doing research for her next book.

Cara Sue Achterberg is visiting animal shelters in Southern states to see how they operate and the conditions animals live in.

Her research began when she decided to visit the places the dogs she was fostering were coming from.

“I had no idea that there were dogs living in kennels that never get walked that never get a treat and don’t have a bed … and they are adoptable nice dogs,” Achterberg said.

Achterberg said she is chronicling her journey on her blog, in addition to gathering information for the book.

“I have fostered over 150 dogs,” Achterberg said. “I finally got to the point where I was like, ‘When are we done? When have we made all the dogs safe?”

She said she started visiting shelters and writing about it to bring awareness to the issue.

“I really feel like so many people, especially where I live that have no idea,” Achterberg said.

She said in Pennsylvania where she lives the shelters do not have the crowded conditions that the shelters she has visited in Tennessee and Alabama have.

Overcrowding at some of these shelters has negatively impacted the treatment of the animals.

She thinks there are a larger number of volunteers involved in other places.

Achterberg said she heard about the Chilton County shelter from a contact in Huntsville.

“There are lots of wonderful people who are saving dogs and I get to meet them,” Achterberg said. “But, there are also so many stories of people who don’t value these animals … I’m trying to figure out why that is.”

Based on her observations, Achterberg said there are rural areas in northern states that are having similar issues.

She said the issue is “solvable,” if there is good leadership as well as public and community support.

“The attitudes of directors and what they can do is phenomenal,” Achterberg said.

She shares stories from each shelter on her blog, Who will let the dogs out?

In one town, it helped bring attention to the mayor who stepped in and improvements being made to the shelter.

Spay and neuter laws have contributed to these lower rates in some states.

“I keep asking this question, ‘What is it about this are? That there are so many … unwanted dogs’ and I am always curious to see people’s answers,” Achterberg said.

Animal shelter Director Jennifer Fesmire said websites giving away free pets as well as spay and neuter not being enforced contribute to overcrowding of shelters.

To encourage pet owners to have their pet spayed and neutered, the Humane Society of Chilton County has a low-cost spay and neuter waiver program. This program and strengthening partnerships with rescue organizations has had a positive impact, Fesmire said.

Her book should be released in July 2020.

Achterberg is the author of three novels and “Another Good Dog,” which chronicles her experience fostering dogs.

Her blog can be found at Whowillletthedogsout.org.