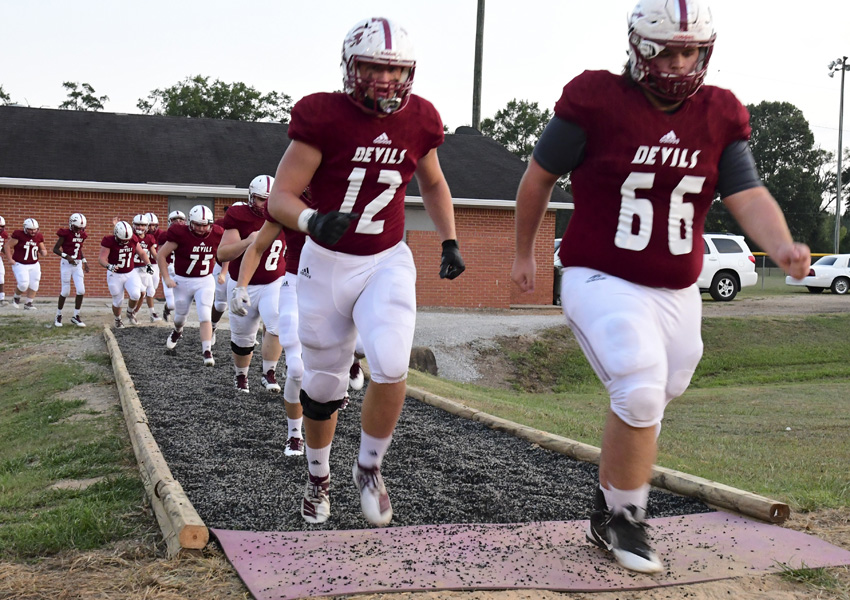 The Maplesville Red Devils take the field to face Linden on Sept. 14. Alabama had the highest increase of football participation in 2018-19 according to a survey by the NFHS. (Photo by Anthony Richards)

It can be argued that high school football participation in the state of Alabama is stronger than ever following the National Federation of State High School Associations annual survey.

According to the NFHS, the 2018-19 survey revealed that Alabama was one of seven states that saw an increase in football participation.

Of those seven states, Alabama had the largest increase, with 1,484 additional participants from the figures measured in 2017-18.

These states were far from the majority, as 42 of the 50 states dropped in numbers from the previous year.

The recent increase is a positive sign moving forward, not just for the state as a whole, but also for Chilton County, especially following the speculation and concern about the status of Verbena’s football program that lingered during the offseason.

The physical nature of football has been a talking point in recent years and could be a reason for the drop in participation.

“I think the AHSAA does a great job of looking at ways to be proactive with heat, injuries and concussions,” Chilton County head coach Tal Morrison said. “All the negative things that parents usually worry about. We’re constantly looking out for the well-being of our students.”

Overall participation in high school sports across the nation registered its first decline in 30 years.