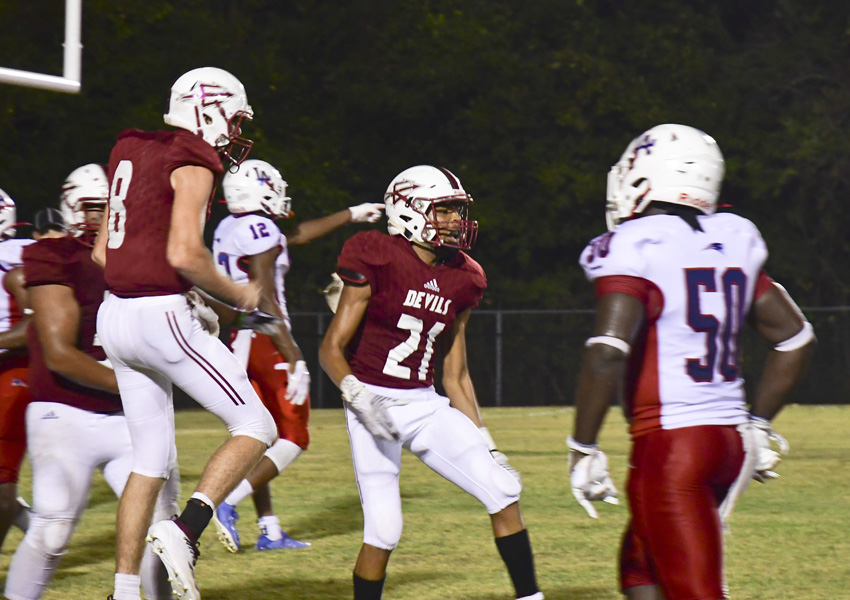 Kayln Hardy celebrates with his teammates after catching the game-winning touchdown pass against Linden on Sept. 13. (Photo by Anthony Richards)

Defense and special teams were instrumental in Maplesville’s narrow 14-13 victory against Linden on Sept. 13.

The Red Devils intercepted a pass and recovered a pair of fumbles in the game to go along with an array of turnover on downs.

The last of these defensive stands came with 54 seconds left in the contest and put an abrupt halt to what was a promising Linden drive to that point.

It proved to be Linden’s last chance of the night.

Maplesville put together two scoring drives in the game and both consisted of precision throws from starting quarterback Jackson Abbott.

Although Abbott’s completion percentage was not great, as he completed seven of 18 passes, he was spot on during those couple of drives.

He wound up throwing for 148 yards and connected with Kayln Hardy for the game winning 9-yard strike with 12 minutes remaining in the fourth quarter.

“We were just trying to make something happen,” Hardy said. 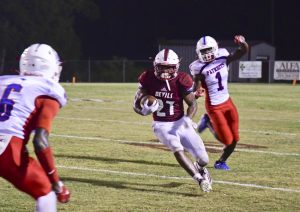 Hardy hauled in two receptions for 53 yards and a touchdown on the night.

However, Linden was able to quickly answer with a touchdown pass of its own, but rattled the extra point off the right upright, which ended up being the difference in the final score.

Maplesville also opened up the game’s scoring with a 13-yard rushing touchdown by Ryan Morrow to give the Red Devils a 7-0 lead after the first quarter.

Morrow finished with 54 yards and the touchdown on 20 carries, while Ajala Robinson led the team in receiving with 74 yards on three catches.

Jacob Johnson led the Red Devils with 7.5 tackles, 2.5 of which were tackles for a loss.

Senior Noah Walls put forth an ironman effort and continued to be a disruptive force despite gutting out nagging injuries.

The game was tied 7-all at halftime and at the end of the third quarter before Maplesville made its move.

“As a team we’re just looking forward to whatever this year brings,” Hardy said.