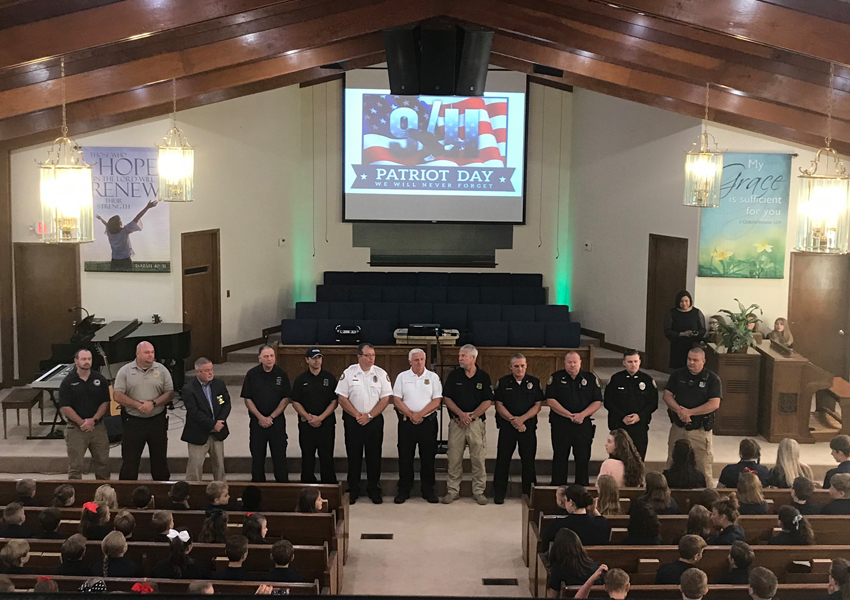 “Looking out at those kids, our future is going to be bright knowing that they will be the ones taking our places one day,” Chilton County Sheriff John Shearon said.

Several members from various police, fire and emergency departments were on hand.

Some, such as Clanton police officer Darrell Bone, were even personally invited to attend the event by students at CCA.

According to CCA principal Charles Gottshall, the school has always taken great pride in hosting such events.

“It spotlights what took place on 9/11 and the first responders that were there during that tragedy,” Gottshall said. “They sacrificed their lives for others, and that’s what a patriot does.”

The CCA athletic teams are known as the “Patriots,” which makes it only fitting that they choose to come together and pay homage on Patriots Day.

“It’s important that the kids see such heroism,” Gottshall said. “We’re really trying to instill that in their DNA.”

The event has grown over the years to include more and more first responders.

“We had a great group come out with a lot of support,” Gottshall said.

Not all students have a family member or someone close to them who has served as a first responder, so it is valuable for them to experience such firsthand interaction with those who are.

“They can put a face with a name and realize that these people are here to help you,” Gottshall said. “We talk about them, but now they got to actually see them. It’s a way to connect.”

According to Clanton Police Chief J.K. Maddox, there are certain programs with the local schools that the various departments put on for children each year.

“We try to have a positive showing,” Maddox said.

Jemison Police Chief Shane Fulmer thanked everyone involved at CCA for putting on the ceremony.