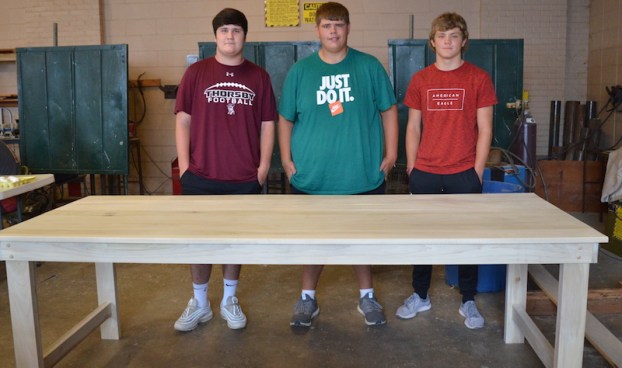 THS agricultural teacher Brian Lucas said Jemison Librarian Tammie McGriff had asked if the students could make a table for the library’s new location when she saw their work at a fundraiser auction.

“I told her we would build something for them because we try to do some community service projects,” Lucas said.

Lucas had students from a few different classes contributing to the project. About 12 students had a hand in the finished product.

The library plans to stain the table to match the wooden bookshelves. Lucas said the table is “made out of poplar which is a hardwood, when you put a finish on it, it gets real pretty.”

Noah Littlejohn, Chris Arledge and Slate Phillips said they worked on the legs of the table, making sure it was level and final touches.

Arledge said he enjoyed “just being able to help our community.”

Making sure the pieces were level to create a sturdy table was the most difficult part.

Littlejohn and Arledge have been a part of FFA since seventh grade. Each said they became interested in joining because Lucas asked them about it. Arledge has competed on the dairy, land and meat judging teams.

Lucas said Littlejohn has been his “go-to guy if I need something done.”

Phillips said the group often works on projects for others.

By J.R. TIDWELL / Editor National Assisted Living Week is Sept. 8-14, and once again the Gardens of Clanton is going... read more