Points pile up for Isabella 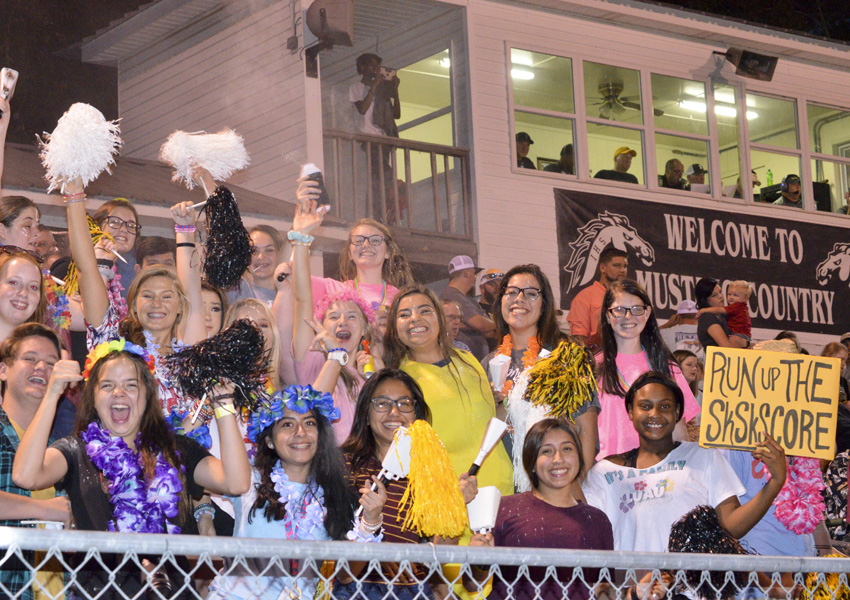 The Isabella student section was fired up all game long, as the Mustangs scored early and often against Francis Marion on Sept. 6. (Photo by Anthony Richards)

It was huge night offensively for the Isabella Mustangs, who hung half of a hundred points en route to a 54-0 victory at home against Francis Marion.

The Mustangs started off region play with a bang by scoring on all five of its offensive possessions in the first half to lead 33-0 at the halftime break.

Field position was in Isabella’s favor for much of the early going, as it started many of its drives around midfield or in opposing territory.

Cole Atchison got the Mustangs on the scoreboard with a 1-yard touchdown run off right tackle.

Kendall Reeves beat his defender of the line and drew a pass interference penalty as a result to help setup Isabella in the red zone.

Lance Price was a workhorse carrying the ball for Isabella and proved difficult to tackle on the night. 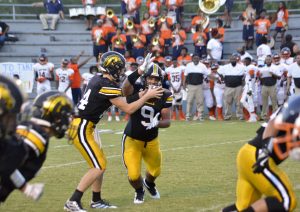 Isabella’s Lance Price (No. 9) and Cole Atchison (No. 14) run a play in the backfield. (Photo by Anthony Richards)

He ran for a pair of touchdowns of 10 and 4 yards respectively on consecutive possessions in the second quarter to extend Isabella’s lead to 20-0.

The defense also started to get involved, as Atchison and Reeves both intercepted passes that wound up resulting in points off turnovers by the offense.

After both picks Atchison threw a pair of touchdown passes to Braxden Giles.

The first pitch and catch was 21 yards over the middle of the field and the second was 38 yards on a wide receiver screen where Giles showcased his speed down the left sideline with 43 seconds remaining in the second quarter.

The Mustangs continued to extend the lead in the second half with a 5-yard touchdown run by Atchison, his fourth score of the game and second on the ground.

Jake Logan eventually came in at quarterback and hit Austin Jones for a 14-yard scoring strike in the fourth quarter, while Zack Chapman capped the night’s scoring spree with a 7-yard touchdown run.

Caleb Washington finished with two of Isabella’s four sacks on the night.