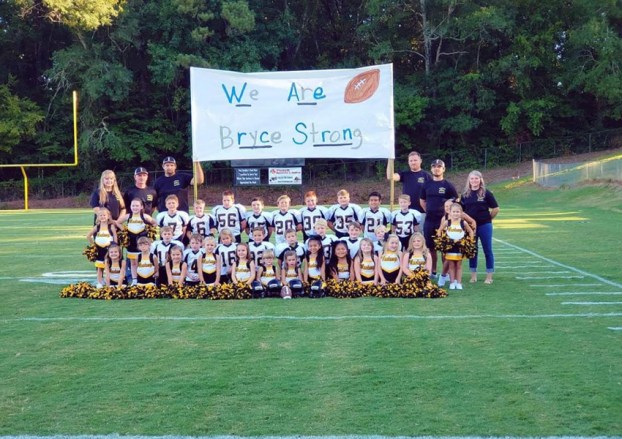 A youth football event will be held at Isabella on Sept. 7 to raise money for 1-year-old Bryce Dawson and his family. (Contributed photo)

The Isabella and Thorsby Youth Football Leagues are joining forces to give back to a local family in need.

Both leagues will take part in a scheduled event on Sept. 7 that will include facing off against each other in an afternoon of football in honor of Bryce Dawson.

Bryce recently turned 1 year old and is fighting the CMV virus, which has caused his liver to fail and he is not eligible for a transplant.

“Bryce Strong” will be the theme of the event.

“We’re really just trying to get together for them [the Dawson family],” event coordinator Krisi Green said. “Bryce’s battle is bigger than anything we’ll ever face in our lives.”

According to Green, although praying is an important part of the process, it is also vital for the community to show the family their physical support.

“They can see the support instead of just getting it in a text or a phone call,” Green said.

The fact that Thorsby and Isabella are coming together despite being natural rivals shows the importance of the fundraiser, which far outweighs the end result on the scoreboard.

“It’s a huge rivalry, but for them to come together for the same cause is a very unique thing,” Green said. 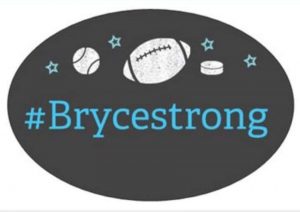 Each player will be wearing a “#Brycestrong” sticker on their helmet. (Contributed photo)

The idea for the event came about after Green had seen the family’s struggles as a coworker of Bryce’s mother.

According to Green, she knows how much she looks forward to watching her child play football and realized that Bryce and his family have not had that same opportunity as so many others.

“It’s a whole different situation, and seeing her go through it just made me want to do something about it,” Green said.

The event will be held at the Isabella Youth Football Field with the midgets playing the first game at 10 a.m. and the minors and majors to follow respectively.

Several local businesses got on board the initiative to help sponsor “Bryce Strong” helmet stickers that each player will be wearing. The stickers will also be available for purchase.

Blue snow cones will be sold and called “Bryce Ice” during the event.

All proceeds raised will go to the Dawson family to help pay for Bryce’s medical expenses.

New procedure for getting married in Alabama

By J.R. TIDWELL / Editor The state of Alabama has changed its procedure on how parties wishing to get married... read more