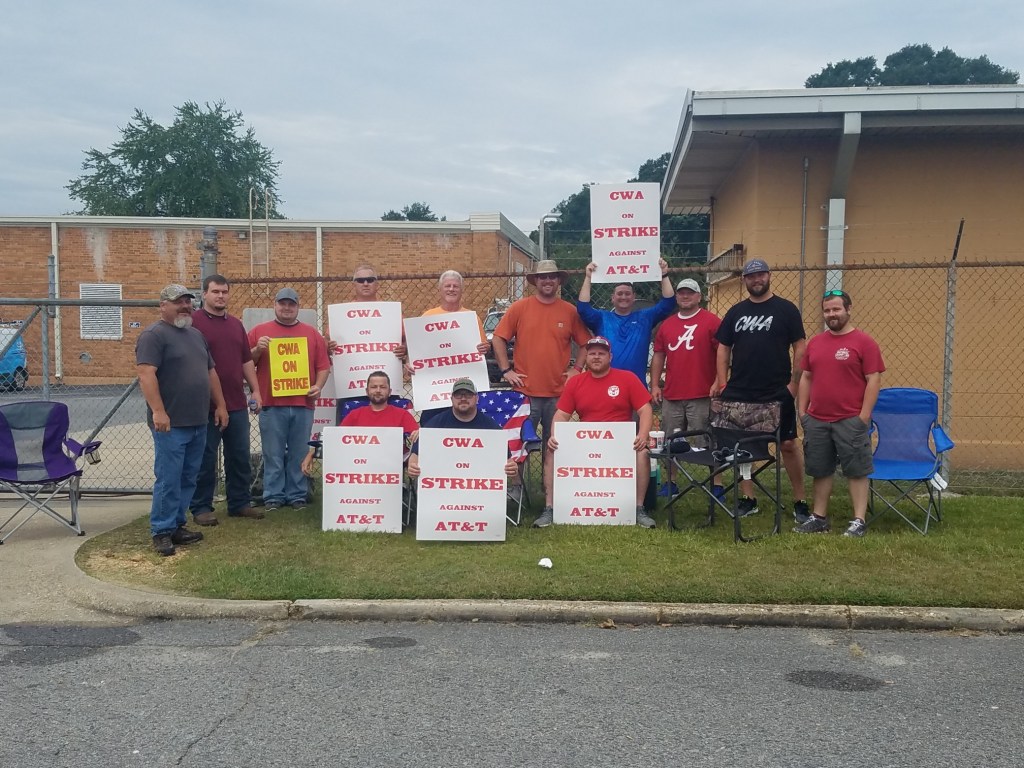 Multiple employees who work for AT&T in Clanton sit outside the location as part of a strike that includes more than 20,000 workers in nine states. (CONTRIBUTED)

People in Clanton passing by the AT&T yard over the past few days have likely seen a group of people sitting near the location holding signs in protest.

Those men are AT&T employees on strike for what they say are unfair labor practices by the company.

Around 20,000 AT&T employees across nine southeastern states are part of the strike, which is being backed by the employees union, the Communications Workers of America.

Brander claims AT&T says it has a ‘surplus’ of workers and is looking to cut back on the work force to save money.

“There have been constant threats that they (AT&T) have ‘too many employees and not enough work,’” Brander said.

He said AT&T plans to lay off 911 employees by Sept. 28. He said one of those employees to be laid off is potentially going to be from the Clanton location, but there could be more layoffs in the future after the first one.

“We want to keep our job security and our right to a fair contract,” Brander said. “A lot of these employees have been with the company 20-plus years, and we are all being treated as a number. We want to work and take care of our customers, but we want to be treated fairly. We want to negotiate fairly and bargain in good faith, but AT&T refused to send someone to the table.”

Brander said CWA has been trying to reach an agreement with AT&T since May.

“We are the face of the company,” Brander said. “We are who the customers see.”

Brander said they are splitting into two shifts to keep a presence at the AT&T yard and usually have all 20 employees from the Clanton yard involved each day.

AT&T has disagreed with the union’s claims of ineffective bargaining and says there will be no disruption to cell service during the strike.

Brander said he and his fellow union members are trying to “nip it in the bud” by going on strike to protest AT&T’s planned layoffs before they happen.

“If we don’t fight now, what could we fight for later on?” he said.

Brander said he and his fellow employees on strike appreciate any support given to them by the community.

“We are going to stand together,” he said.